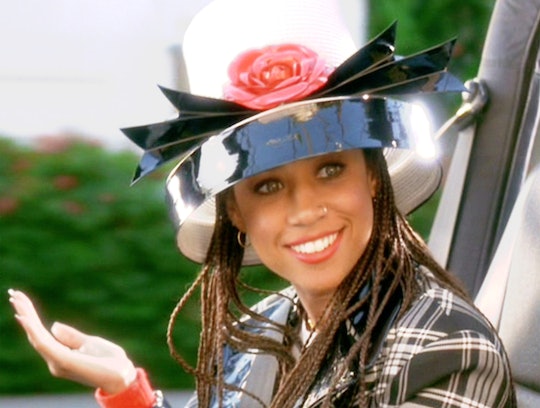 The ‘90s are calling — and Donald Faison’s daughter Wilder picked up the phone. She’s 7 years old and full of sass in her Halloween costume that pays tribute to one of the most iconic characters of the decade: Dionne from Clueless, Cher’s feminist best friend. In the most epic ‘fit of the year, Wilder recreated not just Dionne’s look, but her whole vibe, right down to her no-nonsense look and pursed red lip. You can just picture her calling out ignored stop signs without missing a beat and reminding her beau Murray (played by Faison) to stop calling her “woman.” It’s truly a work of art.

Faison shared a picture of himself and his daughter on Instagram yesterday recreating the iconic 1995 film. In it, Wilder is wearing Dionne’s black-and-white plaid skirt-and-jacket set, complete with a matching handbag around her wrist, old-school cell phone (with antenna!) in her hand, knee-high black socks, and a red shirt. She has long braided hair exactly like Stacey Dash wore in the movie and the amazing, over-the-top black hat with huge red flower bow on top. Wilder completes the look with the most perfect hip pop that shows just how much she studied her character.

Sitting in the background is Faison, who has a backwards cap with his hand resting on his chin as he gives an “I’m in trouble” look to the camera — much like he was as Murray when he dated Dionne in the film. This much greatness and Wilder’s not even a pre-teen yet? A true legend.

Mona May, a costume designer for Clueless approved of this awesome look. “OMG she is a perfect Dionne!! Where did you find the hat?? #monamayapproved !! 🤍🖤🤍🖤🤍🖤🤍💛” she wrote.

Many other celebrities and fans commented as well. Jaleel White wrote, “The way she poppin that hip tho 🫣😂😂😂😂😂😂 #girldadtears 😭.”

“🏆 y’all win! This is everything i needed to see today!” wrote celebrity hairstylist Christine Symonds.

Actor Max Jenkins quoted a famous Murray quote in his comment: “Ok but street slang is an increasingly valid form of expression.”

“Does not get any better than this brooo 💥💥,” actor Eric Nelsen wrote.

This isn’t the first time Faison has recreated scenes from Clueless. Back in 2016, the actor tweeted a picture of himself shaving his head, just like Murray did in the movie. He captioned it, "Cause I'm keeping it real!!" which is what he said to defend himself to Dionne, who threatened to call his mother (maybe Wilder should try that!).

Celebrities have nailed Halloween this year — peep Bindi Irwin’s family dressed up like characters from The Office — but Faison and his daughter just won. Wilder officially knows what it’s like to have people be jealous of her, and it’s so cute!