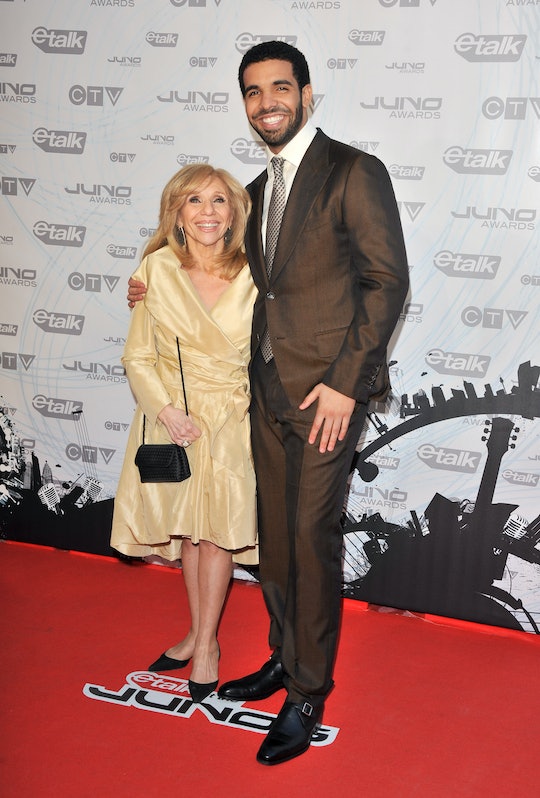 Just days after jokingly roasting his dad about his life-size tattoo of him on his arm, Drake debuted some new ink that pays homage to his mother. On Thursday, the “Laugh Now, Cry Later” rapper shared a photo on Instagram showing his mother’s initials tattooed on his cheek.

The initials — “SG” — stand for his mother’s name, Sandra Graham, aka “Sandra Gale” (or Sandi), as Drake captioned his Instagram post. Los Angeles tattoo artist Nal also shared a video on his personal Instagram page tattooing the initials of the Grammy-award-winning artist, captioning the post, “The boi @champagnepapi.”

The 35-year-old rapper and father of one shares a close bond with his mother. In September 2021, Gale penned a heartfelt card to her son ahead of the release of his Certified Lover Boy album. “It's finally come, the countdown has reached one, with each new album my heart skips a beat, being your mother has been my life's greatest treat,” wrote Graham. “It's been a long hard road together, now there's one more day to go. I wanna celebrate you son, more than you'll ever know.” She signed the card, “Love you more now and forever.”

Drake’s mother is a former English teacher and a florist in Toronto. She’s frequently celebrated in her son’s music like in songs, “You & 6,” “Look What You’ve Done,” “Keep The Family Close,” “Closer to My Dreams,” and “Sandra’s Song.”

“My mother is an incredible woman,” he told The Hollywood Reporter in a 2017 interview. “She’s always just told me, ‘You know, whatever you want to do, whatever you end up being, I’ll always love you. I’ll always support you.’”

Sandra and his father, Dennis Graham divorced when Drake was 5 years old. Over the years, the “Hotline Bling” rapper has been open about his childhood, including his Sandi’s struggles as a single mother. “Everybody thinks I went to some private school and my family was rich,” he told Complex in 2011. “Maybe it’s my fault. Maybe I haven’t talked enough about it, but I didn’t grow up happy. I wasn’t in a happy home. My mother was very sick. We were very poor like broke.”

But as the years went on and Drake found success, things started looking up for the family. Last Mother’s Day, Drake celebrated his mom and mothers everywhere by launching his new line of candles with Better World Fragrance House and Sandi was even one of his models for one of the posts.

This isn't the only time that Drake has honored a parent with some ink. He also has a portrait of his father on his arm, which nearly matches the spot where Graham has his own tattoo of his son back in 2017.

More Like This
Zaya Wade Is Rocking New Long Hair & As Gabrielle Union Put It, She's A "Vision"
Cardi B Issued A Hilarious Warning For Anyone Who Tries To Touch Her Gift From Beyoncé
Abbott Elementary's Sheryl Lee Ralph Received A Beautiful Gift From Beyoncé
Little Black Girls Are In Awe Of Halle Bailey In The Little Mermaid