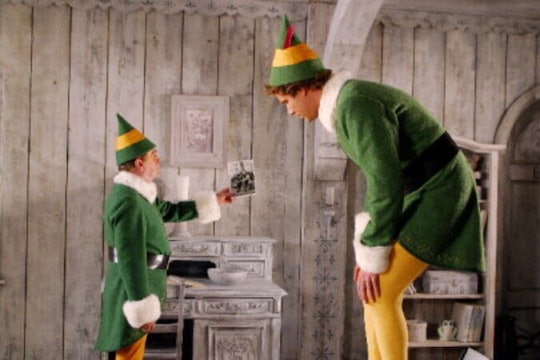 Let’s just say a lot of sugar was eaten during filming.

SANTA!!!! It’s officially beginning to feel a lot like Christmas. And for a few of us, that means eating a row of Tollhouse cookie dough, syrup-coated spaghetti, snowball fights, and singing “Santa’s Coming To Town” in the middle of Times Square. At least those are some facts about Elf starring Will Ferrell that we all remember fondly.

Another? The 2003 movie was one of Ferrell’s first official, leading roles after Saturday Night Live. Since it premiered in 2003, Elf has become a Christmas favorite. Not only does it have laughs for days, but there are also tons of Easter eggs that pay homage to other holiday staples and Christmas classics.

In a 2003 interview with Black Film, Ferrell spoke about his expectations for the movie, saying that he hoped the movie would bring people laughs. “Hopefully we have made a movie that people are going to find funny,” he said, “and something that can be a shared experience for the entire family in a way that's emotionally satisfying as a story but also works as a comedy and captures the spirit of the holidays all kind of rolled into one.”

Indeed, he did. Besides all the quotes, here are a few, quirky facts about Elf you may not have known about.

More Like This
Where Are The Toys Of Toy Story Today?
11 Great Movies About Dads & Daughters To Watch On Father's Day
10 Of The Raddest Movies From The '90s To Watch On Girls Night
Marcel The Shell Is Officially A Movie Star