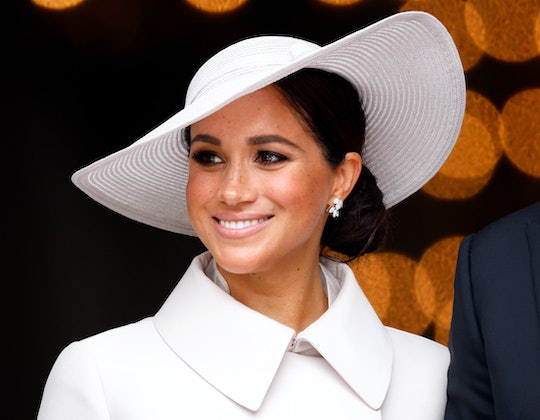 Everything Meghan Markle & Lilibet Have In Common

In honor of Markle’s 41st birthday, we take a look at the mother-daughter duo.

Lilibet “Lili” Diana is something of a mystery to royal fans. We don’t really know much about the 1-year-old daughter of Meghan Markle and Prince Harry. We have seen only a few photos of her, and since her parents stepped away from their senior royal roles, they haven’t been sharing as many little behind-the-scene nuggets about their young family. Still, if you dig around you can get a bit of a sense of what Lilibet is like. And there’s lots of way that she’s just like her mom.

They were both born in California.

Let’s start with the obvious, shall we? Meghan Markle is a California girl, born and bred. She was raised in Los Angeles by her mom Doria Ragland and dad Thomas Markle. While her oldest child, 3-year-old Archie, was born in the United Kingdom like his dad Prince Harry, Lilibet was born on June 4, 2021 at the Santa Barbara Cottage Hospital in California. So they’ve got that California connection going on.

They were both born in summer months.

Meghan Markle celebrates her birthday on August 4, while Lilibet is a June baby. Yes, an argument could be made for Lilibet possibly being a late spring baby, but June is definitely summer if you live in California. They will both know the fun of a summer birthday party, and this is a joy they can share.

They have floral nicknames.

Lilibet is actually called “Lili.” She even dressed as Flower, the skunk from Bambi, for her first Halloween. As for Markle, her mom Doria Ragland has long called her “Flower” as a sweet nickname.

Meghan Markle is an understated fashion icon, favoring classic, neutral color palettes and timeless silhouettes. The few photos we’ve seen of Lilibet point to her following in her mother’s footsteps. The girl likes a white sundress.

They both go in for simple birthday celebrations (so far).

The Duke and Duchess of Sussex were in London for Queen Elizabeth’s Platinum Jubilee celebrations in June, which meant they were there for their daughter’s first birthday as well. How did she celebrate? A simple backyard picnic at Frogmore Cottage where guests were told to drop by whenever they liked and kids had their faces painted. Markle tends to keep her own birthday celebrations low key as well, particularly since she’s become a mom.

More Like This
Princess Charlotte Had A "Lovely" 7th Birthday, According To Her Parents
The Cambridge Kids Could See A Big Change At Their New House
Kate Middleton Once Gave Prince William A Nickname That'll Make You Clutch Your Pearls
Prince George Was Invited To A Birthday Party & His Parents RSVP'd So Sweetly