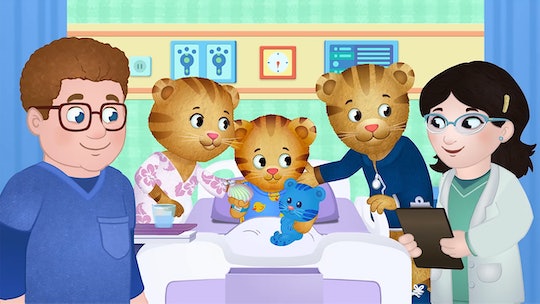 Exclusive: Daniel Tiger Visits The Hospital For The First Time In A Brand New Episode

Daniel Tiger learns hospitals aren’t as scary as they seem and that it’s OK to ask for space when you need it.

Daniel Tiger is back! New episodes of Daniel Tiger’s Neighborhood are expected to land on PBS Kids later this month and each will feature a story built around an important or topical issue, including letting loved ones know we’re thinking of them even when we’re far away and helping family members who are sick. In one episode, Daniel feels nervous about having to have an operation in the hospital. Take an exclusive look at the new Daniel Tiger’s Neighborhood episode below!

“This week of new episodes features many strategies that are perfect for back-to-school time,” Chris Loggins, Supervising Producer for Daniel Tiger’s Neighborhood at Fred Rogers Productions, tells Romper. “Themes include appreciation, new experiences, and missing friends and loved ones, to name a few. We hope that families will enjoy these new stories and find them helpful as many children head back to school during this challenging time.”

In an episode set to premiere Tuesday, Aug. 17, Daniel visits the hospital for the first time to have an operation. While staying in the hospital can be a pretty nerve-wracking experience, Daniel’s parents and doctor help him feel at ease.

In Romper’s exclusive clip, Daniel meets Dr. Lee, the medical professional who’ll be performing his operation. To help Daniel feel more at ease, Dr. Lee answers all of his questions and explains what will happen before and during the operation. “When we do something new, let’s talk about what we’ll do,” Dr. Lee sings in the clip before filling Daniel in on the details.

“Going to the hospital can be an overwhelming experience for any of us, [but] especially for young children,” Loggins says.

In fact, Loggins says Fred Rogers Productions has actually wanted to create an episode in which Daniel goes to the hospital for a long time because they know it’s an experience many young children may have. “We’ve seen Daniel go to Dr. Anna for his regular well-visit, but we know a lot of children may need to visit the hospital at some time for a variety of reasons,” Loggins says. “We hope this episode will give caregivers and children a resource to prepare for a visit to the hospital by helping them know what to expect... If Daniel can do it, maybe that will make it easier for young viewers too.”

Among the things Loggins’ team wanted to show, was that although a hospital is full of new faces, new equipment, and new experiences, it doesn’t have to be a scary place. “It was also important to us to show Daniel learning that doctors are there to take care of us,” Loggins says.

Of course, “Daniel Goes to the Hospital” isn’t the only brand new episode of Daniel Tiger’s Neighborhood expected to premiere on PBS Kids later this month. Five new episodes of the Emmy-award-winning children’s show will debut the week of Aug. 16.

In the first episode, Daniel’s younger sister Margaret gets sick and has to miss celebrating Thank You Day at the Enchanted Garden — at least until Daniel decides to bring the festivities to her. In another episode, Daniel deals with missing his grandfather while his friend Prince Wednesday sees his older brother leave for college. Later in the week, the show tackles the importance of family mealtime and goes over how to nicely ask people to back up and give you a bit of space.

Families are encouraged to check their local PBS Kids listings to learn what time the brand-new episodes of Daniel Tiger’s Neighborhood will air in their town. Families can also find new episodes of Donkey Hodie available to stream online or on the PBS Kids app.

More Like This
Take A Sneak Peek At Brand New Daniel Tiger's Neighborhood Movie
Exclusive: 'Bluey' Celebrates Father's Day With A Look At Bandit's Best Moments
'Caillou' Is Officially Getting A CGI Reboot Whether People Like It Or Not
Viral TikTok Breaks Down How Beautifully Bluey Depicts One Character’s Infertility