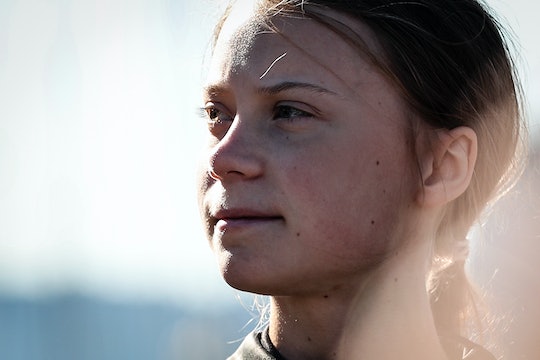 Greta Thunberg On Attending Protests With Asperger’s: “It’s Quite Exhausting”

The teen climate activist opens up about her Asperger’s diagnosis in Romper’s exclusive peek at the PBS docuseries, Greta Thunberg: A Year to Change the World.

Swedish teenage climate activists Greta Thunberg is opening up about having Asperger’s while also being the face of a global protest movement. In Romper’s exclusive clip of Greta Thunberg: A Year to Change the World, an upcoming three-part docuseries from PBS, Thunberg reveals that attending large-scale protests and rallies has actually been hard and exhausting as her Asperger’s diagnosis means she doesn’t like to be surrounded by people.

When Thunberg first began skipping school in 2018 to protest alone outside of Swedish Parliament, she had no idea her school strike for climate change awareness would spark a global movement. Now, nearly three years later, the teen activist stands solidly at the helm of that movement, demanding world leaders take immediate action against climate change. But as Thunberg reveals in the clip shared exclusively with Romper, being the face of a global climate change movement isn’t always easy — especially for someone with Asperger syndrome.

“Marches are my thing. That’s what I do,” Thunberg says in a clip from Greta Thunberg: A Year to Change the World. “But it’s actually very hard for me. I don’t look forward to them. I have Asperger’s and I don’t like everyone surrounding me.”

Asperger syndrome is one of several conditions considered to be a part of Autism spectrum disorder (ASD), according to the U.S. Centers for Disease Control and Prevention (CDC). ASD is a developmental disability that can impact an individual’s social, emotional, behavioral, and communication skills. Both ASD and Asperger’s can manifest itself in different ways in different people.

For Thunberg, one of those ways appears to be overstimulation. In Greta Thunberg: A Year to Change the World, the climate activist explains that years before she began her school strike for climate she struggled with feeling overstimulated by traditional school environments. “There was too much stimulation and so I had to go to a special school where there were five people in my class,” Thunberg says.

It was from this small classroom that Thunberg inadvertently found herself catapulted into international headlines and leading or attending protests tens of thousands of people attend. “To go from there to this reality, it’s just a big contrast,” she admits. “There are people everywhere and everyone is screaming and it’s quite exhausting.”

But Thunberg says she isn’t interested in letting the fact that large crowds can be hard and exhausting to deal with slow her down. “It is my moral duty as a human being to do everything I can so, I don’t know, I just have to do it,” she says in the clip shared with Romper.

Greta Thunberg: A Year to Change the World, which PBS developed in partnership with BBC Studios’ Science Unit, will premiere in its entirety this Earth Day on PBS stations nationwide. To catch it, tune in to your local PBS station on April 22 at 8 p.m. EST. Encore airings of each of the series’ three episodes will run separately at various times on various PBS stations from April 28 to May 12.

More Like This
Squid Game: The Challenge Reality Series Is Coming To Netflix
Taraji P. Henson Says “Guns Have More Rights Than A Woman” At The 2022 BET Awards
Ireland Baldwin Shares Her Abortion Story In An Emotional TikTok
'Hocus Pocus 2' Officially Has A Release Date To Look Forward To