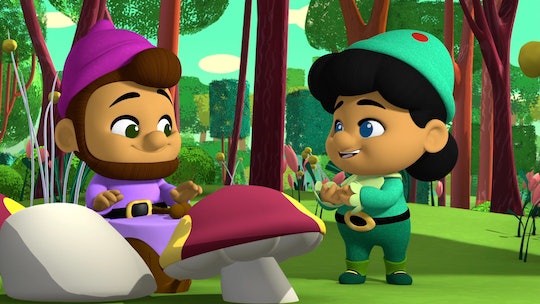 A gnome named Fig, who is deaf and communicates via ASL, will be featured in Friday's episode — catch a sneak peek here!

Mickey Mouse and the gang are meeting a new character on Disney Junior’s Mickey Mouse Funhouse this week, and he is the show’s first deaf friend! This character is a gnome named Fig, who will be on the new episode, “The Music of the Seasons,” premiering Friday, May 13. Fig will also appear in future episodes of Mickey Mouse Funhouse, a show geared toward kids ages 2-7 featuring Mickey, Minnie, Donald, Daisy, Goofy, Pluto, and Funny, an enchanted talking playhouse.

The writer of “The Music of the Seasons” episode, Kate Moran, was inspired to create Fig because she has close family members who are deaf. She is passionate about bring more inclusion to the deaf community through her work, and she believes in the importance of representation in children’s entertainment.

“We need to see EVERYONE in children's media,” Moran tells Romper. “Expanding the represented world means that when a child meets a child who is deaf, for example, they will have some understanding of deafness and what that means, and be able to communicate and play and become friends.”

Fig is a drummer, who loves music and communicates via American Sign Language (ASL). Along with his sister, Olive, Fig helps Minnie and Daisy understand deafness and the importance of sign language. In the episode, Mickey and Minnie sign “I love you,” which is still possible with just four fingers!

“It was really important to me to write a character who was fun and clever and talented, who happened to be deaf,” says Moran. “His deafness does not define him, nor is it the most important thing about him. It is one aspect of him, among many awesome attributes.”

Delbert Whetter, a board member for RespectAbility, which is a disability-led nonprofit that works to fight stigmas and advance opportunities for people with disabilities, was a consultant on the episode. He worked with writers to ensure accuracy in Fig’s portrayal of someone who is deaf.

Creating Fig for a popular preschool show is a great way to introduce kids to deafness in a positive, inclusive way! And don’t worry — if you miss the premiere, “The Music of the Seasons” will continue to re-air throughout the month of May and longer on Disney Junior.

Watch Romper’s exclusive clip of the episode below.

Meet Fig when “The Music of the Seasons” premieres this Friday May 13, on Disney Junior.

More Like This
Take An Exclusive Look At A New 'Daniel Tiger’s Neighborhood' Episode About Pool Safety
5 Kid-Friendly Movies To Celebrate The Last Day Of School
Disney's Enchanted Sequel Follows Princess Giselle As A Suburban Mom On A Mission
There's Officially A 'CoComelon' Spinoff & It's All About JJ's Best Friend, Cody!