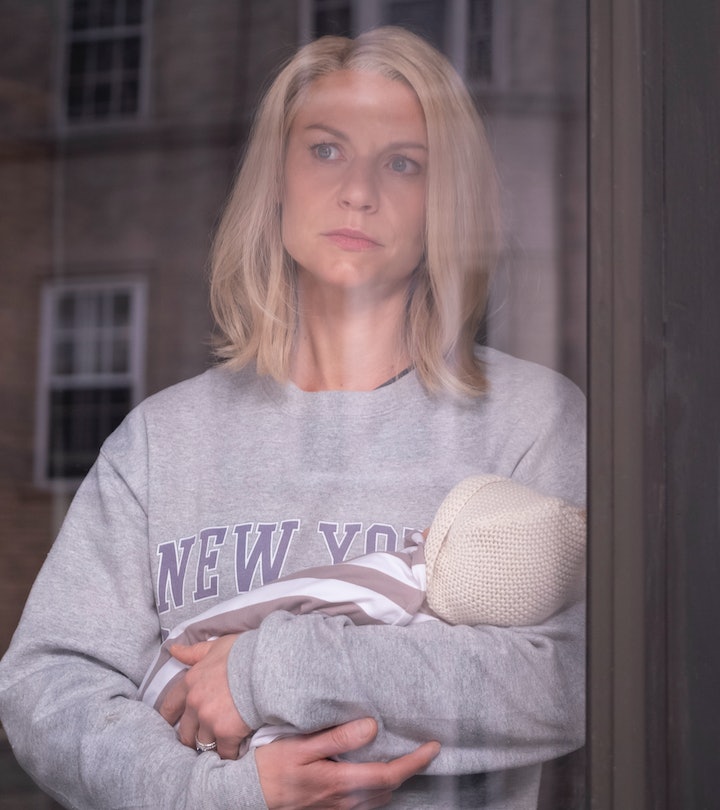 In telling Rachel’s story from her husband’s point of view, the show illuminates a problem that’s all too real.

At first, Fleishman Is In Trouble may seem like a tale about Toby Fleishman (Jesse Eisenberg), an anxious, divorced dude trying to make sense of his life after splitting from his career-driven ex, Rachel (Claire Danes). It’s not, really. Surprisingly, at the heart of this narrative lies a birth story. And it’s a complicated, tragic one.

Throughout the first six episodes of Fleishman Is In Trouble, showrunner and writer Taffy Brodesser-Akner closely follows the structure of her original novel, detailing Toby Fleishman’s perspective on the past and present of his relationship with Rachel. It’s a story with familiar strokes: two beautiful people meet, fall in love, have kids, and then split. But then, Rachel mysteriously disappears.

(Below this point you will find spoilers for Episode 7 of Fleishman Is In Trouble.)

There are always multiple sides to a story, and when Rachel finally gets the opportunity to reveal her truth in the penultimate episode of the series, we begin to see things very differently. We soon find that a single moment in Rachel’s life — an inexcusable consent violation performed by an unfeeling doctor during the birth of her first child — was an inflection point that irreparably altered not only her relationship with Toby, but her life writ large.

Admitted to the hospital at nine months pregnant with dangerously high blood pressure, Rachel finds out that her usual OB-GYN is on vacation. When her labor doesn’t progress, a strange doctor — a curt, rude man — enters the delivery room. Distracted by some well-wishers, Toby steps out, leaving Rachel alone with the bullish doctor and a harried nurse. The duo convinces her to submit to a routine pelvic exam. She agrees but discovers there’s nothing routine about the level of pain she feels; then the doctor forces an instrument inside of her body, breaking her water without her consent. An emergency C-section follows.

While Toby understands that what the OB-GYN did was fundamentally wrong, he can’t seem to wrap his head around why Rachel can’t just move on and bask in the glow of new motherhood.

Brodesser-Akner shrewdly shows us how Toby experiences this moment long before we see things from Rachel’s perspective. Through his eyes, we’re led to believe that his wife is a vulnerable yet difficult patient. And while Toby understands that what the OB-GYN did was fundamentally wrong, he can’t seem to wrap his head around why Rachel can’t just move on and bask in the glow of new motherhood.

In initially telling Rachel’s story from Toby’s point of view, Brodesser-Akner details a tragic problem that’s all too common for pregnant people today. While it might feel logical to think that individuals who have adverse experiences in labor and delivery just magically bounce back from their traumas on a pink cloud of adrenaline and infant cuddles, this is certainly not the case. In fact, childbirth-related PTSD (CB-PTSD) is much more common than the general population might like to believe. A compelling 2017 study found that “as many as 25% of women experience CB-PTSD symptoms after giving birth to a healthy full-term baby.” More specifically, results from a large survey of 943 women around the world showed that two-thirds of respondents reported that their CB-PTSD directly stemmed from maltreatment or perceived maltreatment from their care providers. The article notes that “a perceived lack of control and involvement in decision-making” can contribute to longer-term depressive symptoms for months following childbirth.

In addition, women of color, specifically Black women, all too often find themselves victims of obstetric racism and experience a host of barriers to quality health care during pregnancy, including implicit bias from health care workers.

Stories of mistreatment by medical professionals during pregnancy and childbirth are far from rare. In 2017, Quartz published an article detailing the story of Kimberly Turbin, a woman who was given an episiotomy without her consent during childbirth. In Turbin’s case, her mother had caught the moment on video, documenting that Kimberly was emphatically saying “no” to the doctor even as he cut into her flesh. When Turbin posted the video, she found that tens of thousands of women related to her situation as they shared stories of unwanted C-sections, episiotomies, inductions, and other labor interventions.

Sometimes, such as in Kimberly Turbin’s case, these consent violations are termed “obstetric violence.” As defined by Lamaze International, obstetric violence includes vaginal exams without consent, being treated disrespectfully, forced C-sections, and physical restraint during birth. In fact, obstetric violence is such a widespread problem that the United Nations even recently recognized the issue as a human rights violation. The UN made this decision in part based on information from the World Health Organization, which included statistics such as the fact that 4 in 10 women report experiencing some sort of maltreatment during childbirth, and that a whopping 26.9% of women experienced an unwanted induction of labor.

When we are finally given a window into Rachel’s interior world, we see the devastating impact of how a single consent violation can have a horrific and lasting ripple effect on an entire family. As seen from Rachel’s perspective, her non-consensual induction is defined by sheer panic and helplessness. Even though she’s mostly immobilized in a hospital bed, actor Claire Danes whisks us along in the terror of the moment with wary, darting eyes and a tone of rising panic overwhelming her voice. Rachel’s uncomfortable. She’s scared. She’s alone. And then, as the doctor violently jabs at her uterus, she starts to scream as she suddenly realizes she’s been trapped against her will in her laboring body, rendered helpless to make decisions about what comes next in her birthing story.

At one point in the Fleishman novel, a character observes, “Right before you were pregnant, you were a person. The minute you became an incubator for another life, you got reduced to your parts.” And, for some medical professionals, this reduction to incubator status is reason enough to ignore feedback from their patients. Misguided and myopic at best, this flawed approach causes undue physical and emotional trauma for new mothers.

White, wealthy, pregnant-by-choice, and able to access top-tier health care, the character was practically engineered to have every advantage available to her throughout her pregnancy.

In the wake of the recent Supreme Court decision to overturn Roe v. Wade, the concept of reducing pregnant bodies to simple incubators is certainly a topical one. How can we mandate that individuals give birth in a climate where a large percentage of pregnant people end up carrying mental and physical scars that can linger for a lifetime? (Adding insult to literal injury is the fact that in many, many places, access to prenatal and pediatric care is becoming increasingly unavailable, taxing the systems that remain in place and making access to services unattainable for many others. Forcing women to have children against their will is horrifying enough without adding the absolutely impossible task of finding health care, much less quality, patient-focused health care.)

The fictional Rachel Fleishman is a portrait of a picture-perfect prenatal patient. White, wealthy, pregnant-by-choice, and able to access top-tier health care, the character was practically engineered to have every advantage available to her throughout her pregnancy. And yet. And still. In one of her most vulnerable moments, Rachel finds herself in a position where her agency is stripped from her in an instant.

Throughout the vast majority of Fleishman Is In Trouble, Rachel’s pain is minimized and dismissed. So, when she’s finally given a voice, the reveal is all the more shocking. The seventh episode guides us through the aftermath of Rachel’s birth and illustrates the lingering impact of the OB-GYN’s terrifying violation. One symptom of CB-PTSD is feeling ashamed or like a failure as a mother, and suffering in silence due to the shame of the situation. In the weeks following her daughter’s birth, Rachel does try to talk to visitors about how horribly traumatic her experience was, but no one, not even her husband, wants to listen to her. Toby encourages her to go to a postpartum support group, but she finds that no one can relate to her story there. Instead, she attends a sexual assault group, but she can’t bring herself to share verbally. Adrift in a sea of unmanageable emotions, she howls in distress, sobbing until the other group members corral around her in a cocoon of support.

As Rachel tries to bond with her newborn daughter in the aftermath of her traumatic birth experience, Lizzy Caplan’s voice-over solemnly states, “This was Rachel’s introduction to motherhood.”

The anguish of feeling like a powerless failure in childbirth and, subsequently, motherhood, drives Rachel to return to work and reclaim some of her autonomy. As Rachel is depicted grappling with a decade of severe anxiety and depression as a result of a doctor’s unthinking consent violation, it’s disheartening to think that the only metric of a successful birth that seems to count is a living, breathing infant. Bystanders from brusque health care professionals to unfeeling politicians to oblivious husbands (looking at you, Toby Fleishman) would do well to remember that women are not incubators, they are complex people who deserve consideration beyond their ability to create life.

More Like This
Julia Fox's Apartment Tour Is A Glorious Antidote To Influencer Culture
Why You Should Go Ahead And Have That Fourth Baby
'Women Talking' Overwhelmed Me With Grief — And A Sense Of Possibility
Why Is My Vagina Itchy? Experts Explain
What Parents Are Talking About — Delivered Straight To Your Inbox