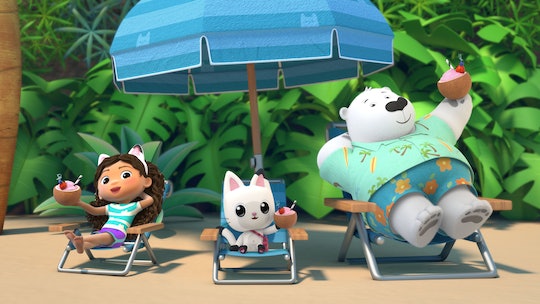 If your kids couldn’t get enough of Gabby and her sweet cat pals, get psyched because more of Gabby’s Dollhouse is coming soon. Season 2 of the hit children’s series premieres on Aug. 10 and Romper has an exclusive peek at what’s to come, including an important message about sunscreen as the gang hits the beach.

In the second season of Gabby’s Dollhouse, which released its first season back in January, kids can expect to see more DIY crafting fun, cozy sleepovers, fun movie nights, and what can only be described as a “cat-tastic” birthday party for a certain little kitten. Gabby, Pandy Paws, and the rest of the friends who exist inside the magical dollhouse are ready for more adventures, and as with the first season of the CGI/live-action series, it’s all about sweet, innocent fun.

In Romper’s exclusive new look at the new season of Gabby’s Dollhouse, Gabby and Pete the panda bear (who is quite well-dressed in his shorts and tropical shirt) are hanging out on the beach with Pandy Paws. Playing some funky guitar, playing ball, building sand castles, paddle-boarding, and generally having a blast. Until said Pete gets reminded by a stern little Cat-Rat that he forgot the number one rule of the beach: Put on your sunscreen.

Pete dutifully applies his sunscreen and introduces himself to Cat-Rat, who really struggles to let the fact that Pete forgot his sunscreen go. He seems somewhat power hungry in his little vehicle, but in a funny way so it’s fine. Watch for yourself in the fun clip below:

Pete the Polar Bear gets a lesson in sunscreen.

Gabby’s Dollhouse has been a hit with preschool-aged kids, touching on that particular joy of unboxing a surprise that kids have learned to love and mixing in a magical dollhouse full of cats who come to life and play with you. Add some crafts, get the cats to bake you cupcakes every now and then, and you’ve got a winning formula. The show was created and executive produced by Traci Paige Johnson (Blue's Clues, Daniel Tiger's Neighborhood) and Jennifer Twomey (Blue's Clues, Team Umizoomi), people who clearly know they way to a preschooler’s heart. Surprises and magic and cats.

While you wait for the new season to drop on Aug. 10, you can catch the first season on Netflix or check out Gabby’s Playhouse YouTube channel.

More Like This
Exclusive Eureka! Clip Introduces Star Of Disney’s New STEAM Preschool Series
Exclusive: 'Bluey' Celebrates Father's Day With A Look At Bandit's Best Moments
'Caillou' Is Officially Getting A CGI Reboot Whether People Like It Or Not
Lyle, Lyle, Crocodile Is Heading To The Big Screen As A Musical Comedy