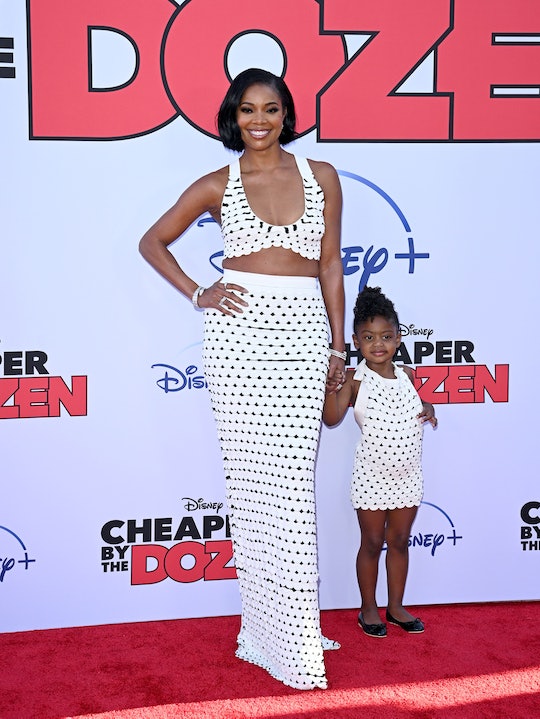 Gabrielle Union just celebrated her “glorious rebirth” with a beautiful picture on Instagram in her birthday suit. Just a few days later, the glamorous actor and mother was in back-to-school mode, sharing several videos with her adorable daughter Kaavia James getting her braids done and playing outside. The rebooted Cheaper by the Dozen star not only showed off her kid’s awesome hair, she posted a hilarious Frozen-themed video with the inescapable truth that nobody really wants to be the character Anna, when you can pretend to be be a powerful ice princess like Elsa (who also has the more exciting wardrobe).

Kaavia looked like a little model as she got her braids done with some beads and wore an “Everyone Welcome” T-shirt with the LGBTQ-supporting symbol of the rainbow flag. She also showed off some incredibly impressive moves on her scooter that should make her basketball star dad, Dwyane Wade, extra proud of her athleticism. Together, Union and Wade are raising five children together.

In her most recent Instagram post, Union knelt down to her daughter’s level in a pretty fabulous green silk robe, while her outspoken 4-year-old lovingly stroked her mama’s long ponytail.

“Oh my gosh, so you’re OK with me being Elsa. Are you going to be Anna?” Union asked.

“Ain’t nobody want to be Anna,” joked Union with a truthful burn to the Frozen character.

The Bring It On alum ended the video by looking right into the camera lens, flexing her actress muscles, and giving a very expressive look. “I’m just an Anna with Elsa dreams. @hairbywankaya didn’t have to say ‘NOOOOOOO!!!’ Like that tho 🤣😭🤣😭🤣,” Union captioned the lighthearted post.

We already know that Kaavia James is an enthusiastic fan of the Disney anthem “Let It Go” as she belted out the cartoon banger in her signature spotlight-stealing fashion. She continues to delight social media audiences with her unforgettable interpretive dances. The famously “Shady Baby” also contributed some amazing online content on how to be a toddler boss and do your very best to relax.

While fans and followers look forward to Union sharing more details of her body-baring rebirth, thankfully she is still providing entertaining videos of Kaavia James Union Wade to tide us over in the meantime.