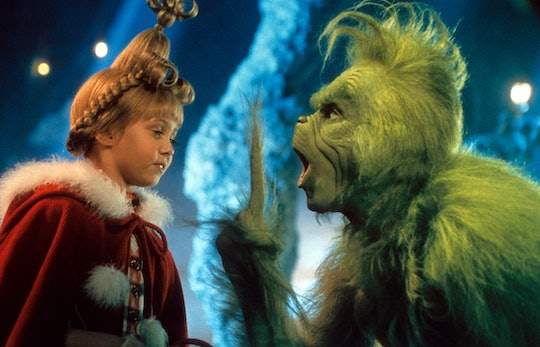 Not To Be A Total Grinch, But The Mean One Is Absolutely Not For Kids

There’s something about the snarky green Grinch that is so alluring. Is it his tendency to always cancel plans? His relatable holiday snark? His dedication to alone time? Kids love the vile one, too, with his hilarious jokes and sneaky ways and adorable dog, Max. But the latest installment of the classic is definitely not for kids — XYZ Films’ The Mean One is an R-rated slasher/horror film that takes “the vile one” to a whole new level this December.

The Dr. Suess-created character first stole Christmas and hearts around the world in the 1957 book How The Grinch Stole Christmas! and the subsequent 1966 musical/short featuring the now-iconic “You’re A Mean One, Mr. Grinch” song by Thurl Ravenscroft. Jim Carrey’s live-action version in 2000 made fans see another side of this cuddly-as-a-cactus character — one whose heart didn’t shrink three sizes until he was laughed at and mistreated by the community — and Benedict Cumberbatch’s 2018 animated The Grinch made us laugh all over again with his misdeeds. But this latest iteration should only be streamed after the kids go to bed (and with all the Christmas lights turned on bright) because it is going to be scary.

The Mean One is a slasher parody of The Grinch.

Unlike previous adaptions of How The Grinch Stole Christmas!, The Mean One is a “violent slasher parody,” according to Deadline. The movie is directed by Steven LaMorte and stars David Howard Thornton (Terrifier 2), as the furry green, Santa-suit-wearing Mean One who lives on a mountain above Frazier Park. Cindy You-Know-Who is played by Krystle Martin (a stunt performer and coordinator). She returns to town to seek closure after her parents were literally “butchered” by The Mean One. It’s bloody and grisly and for adults only.

“As a passionate fan of seasonal horror, The Mean One is exactly the kind of film that lands on my personal ‘nice list,’” said Alex Williams, XYZ Films’ manager of Acquisitions and Developments, per Deadline. “This movie is a stunningly great time with a ferociously subversive turn from David Howard Thornton – and XYZ Films is so proud to be bringing this soon-to-be iconic Christmas slasher to audiences this holiday season.”

The film will be released in time for Christmas.

The Mean One will be released for free online on Dec. 15, just in time for the holiday season.

There is no trailer and no details yet about where it will be released, so you’ll have to keep your eyes peeled. Pro tip: use a 39-and-a-half-foot pole to keep your kids away from this horror flick.