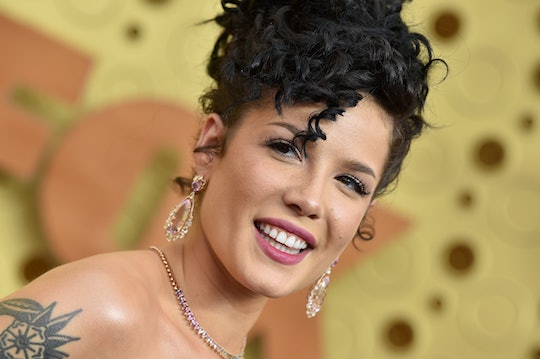 Halsey only gave birth to her first child two weeks ago and she’s nailed nailed one-handed breastfeeding. In honor of World Breastfeeding Week, the singer shared a photo of herself doing just that with her newborn baby, Ender, in the park. Not only did that photo set a great example for normalizing public breastfeeding, it was also evidence that Halsey is the most chill new mom on the planet.

The singer and her screenwriter boyfriend Alev Aydin welcomed son Ender Ridley Aydin on July 14 in the most “‘rare’ and euphoric birth” that was “powered by love,” as she shared in the baby’s Instagram birth announcement. Since Ender’s birth just over two weeks ago, Halsey has mostly focused her social media presence on work. Promoting her new album, If I Can’t Have Love, I Want Power, a collaboration with clothing brand Dickies.

So when Halsey shared a sweet photo of herself sitting cross-legged in the park, breastfeeding baby Ender as he did that thing babies do where they adorably cover their little ear, it was a real moment. And timed perfectly, as the proud mom wrote in the caption, “#worldbreastfeedingweek we arrived just in time!”

Breastfeeding in public spaces remains stigmatized for many mothers across the country despite the fact that it is perfectly legal to do so in all 50 states. The National Center for Biotechnology Information reports that breastfeeding mothers continue to struggle with a lack of support when trying to feed their babies in public, which is why celebrity moms using their platforms to destigmatize public breastfeeding is so important.

Certainly Halsey’s post received rave reviews from her followers. “Beautiful. Thank you for using your platform to normalize breastfeeding!” wrote one social media user while another commented, “Absolutely love seeing people with huge platforms like yours normalizing breastfeeding as a breastfeeding mother myself, not enough representation at all and it really is an incredibly hard yet beautiful journey.”

Even before she welcomed Ender, Halsey used her album cover to celebrate childbirth and postpartum bodies. “This album is a concept album about the joys and horrors of pregnancy and childbirth,” she wrote on Instagram. “It was very important to me that the cover art conveyed the sentiment of my journey over the past few months. The dichotomy of the Madonna and the Whore. The idea that me as a sexual being and my body as a vessel and gift to my child are two concepts that can co-exist peacefully and powerfully.”

It should come as no surprise to her fans that she would be a passionate advocate for breastfeeding moms in public spaces. She is a force to be reckoned with, after all.