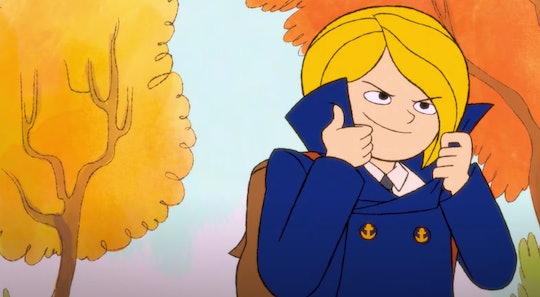 Our favorite grade-school agent is played by Beanie Feldstein.

If you’re looking for the scoop, look no further — the brand new Harriet The Spy animated series is now available on Apple TV+. Whether you’re a fan of the book, Harriet the Spy by Laurie Fitzhugh, or the 1997 movie starring Michelle Trachtenberg, here’s everything you need to know about the new animated series.

Harriet The Spy Is About An 11-Year-Old Girl

Harriet M. Welsch is an 11-year-old girl who is “outspoken and perpetually curious.” With big dreams of being a writer, Harriet, who lives in New York City, knows that she will need to know everything, so, naturally, she becomes a spy. Unlike the 1997 movie, this new series is set in the ‘60s, when the books were originally written.

Produced by the Jim Henson Company, each episode of Harriet The Spy is rated TV-G, which means it will be kid-friendly enough for the youngest kids in your family to enjoy.

You May Recognize Some Stars

As if the series could not get any better, the voice actors take the show to a whole new level. Booksmart’s Beanie Feldstein lends her voice to Harriet and the hilarious Glee and Marvelous Mrs. Maisel actress, Jane Lynch, stars as Harriet’s no-nonsense nanny, Ole Golly. You might even recognize some minor characters, too. Mean Girls actress Lacey Chabert plays Marion Hawthorne, the ringleader of the group of popular girls at Harriet’s school.

And don’t be surprised if the show’s theme song becomes a staple on your daily playlist. Courtney Barnett’s new song “Smile Real Nice” is the theme song for Harriet the Spy. In addition to giving elder Millennial parents some nostalgic Riot Grrrl vibes, the song is a bop and has some pretty great lyrics to sing along to, like when Barnett croons “I like it when I get to be myself.”

Sprinkled in with Harriet’s adventures, misadventures, and silly moments of, say, using cat tails as mustaches, are moments of girl power (“Girls can lead, too!”) and the message of being yourself (“I’m glad I’m not perfect. I would be bored to death.”).

The First Half Of The Series Is Available Now, But You’ll Have To Wait For More

The first five episodes of Harriet the Spy premiere on Apple TV+ on Friday, Nov. 19. But the second half of the first season will air in the spring of 2022 on an as-yet unspecified date.

A subscription to Apple TV+ costs $4.99 per month after a free seven-day trial. With your Apple TV+ subscription you can watch classic family favorites, like It’s The Great Pumpkin, Charlie Brown, or brand new shows, like Hello Jack! The Kindness Show.

This article was originally published on Oct. 13, 2021