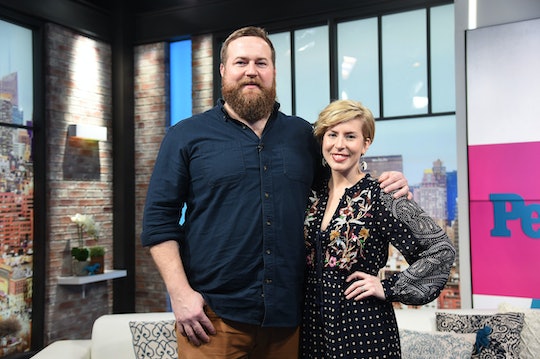 All baby bumps are different, TBH.

Erin Napier’s pregnancy with her second child is proving to be interesting, to say the least. As the Home Town star and her husband Ben Napier prepare to welcome another bundle of joy, the HGTV star shared a photo of her baby bump that she called “weird.” It turns out a few things about this pregnancy have been a bit of a left turn for the busy mom, but she’s taking it all in stride. And making self-deprecating jokes about it in the process.

The Napiers are already parents to 3-year-old daughter Helen, and considered themselves incredibly blessed to be expecting another baby. Especially since Erin had undergone surgery for a perforated appendix in 2014 that doctors told her might make it difficult to carry a baby full term. She did carry her daughter Helen almost to full term, delivering her three weeks early but health, and this time around Erin told People she is “less nervous” about her pregnancy than she was the first time.

Now that she’s 33 weeks along with her second baby, another little girl, things appear to be ticking along nicely. Erin showed off her 32-week baby bump in an Instagram post on Tuesday, and wrote in the caption, referring to her not-super-obvious baby bump, “I know it’s weird. Helen hid the same way right up until the day she was born.”

Of course, every pregnancy is different and every baby bump is going to be a different size. In Erin’s case, there could be a reason why she is not showing as much as she might have expected. "When I had a perforated appendix, I got lots of scar tissue on my organs, and it's possible that's why I don't show," she told People, with husband Ben adding, “The baby’s, like, up in her ribs and lungs.” Fortunately the proud mom reported her baby girl is “big wherever she is,” so nothing to worry about.

Other moms shared their own stories of their baby bumps on Erin’s post. “I have a long torso and barely looked pregnant. But I SURE felt it!” one commented, while another said, “Lucky you! I looked 10 months pregnant from day one. Hope you’re feeling good!” Clearly baby bump sizes run the gamut.