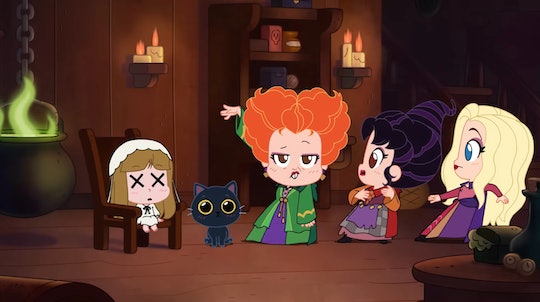 The facial expressions are spot-on.

Hocus Pocus needs no introduction — after 29 years, and you could probably quote the movie by heart. The Sanderson Sisters, with their distinct looks and hilarious one-liners, are legendary, and their cult classic film is still one of the best Halloween movies for all ages. If you love this witchy trio as much as we do, then get ready: your heart is about to run amok with excitement! There is a new Hocus Pocus animated short, and it’s the cutest thing you’ve ever seen.

Disney Channel Animation released a 1-minute recap of the enchanting film on Saturday as part of their Chibi Tiny Tales series, and it’s extremely well done. The Hocus Pocus: As Told By Chibi is now on YouTube, where kids (and their magic-obsessed parents) can watch the adorable mini film on repeat, complete with all your favorite characters.

In the short, the 17th-century witches Winifred, Mary, and Sarah Sanderson (originally played by Bette Midler, Kathy Najimy, and Sarah Jessica Parker, respectively) are cartoon-ified. In the opening sequence, the sisters are hexing a young Emily Binx, who sits in a chair with her eyes X-d out. The Sanderson Sisters look so squishable even as they perform their curse, with Winnie’s red hair and evil glint, Mary’s twirled purple hair and nervous excitement, and Sarah’s long bond trellises and joy coming through in animated form.

In quick scenes, Thackery Binx is turned into a cat; Max, Dani, and Allison accidentally free the witches on Halloween night; and the Sanderson Sisters set out on their brooms to find their Magic Book. There’s even an appearance by zombie Billy Butcherson and the Devil the sisters see while trick-or-treating. It’s amazing!

There’s no talking in this cute sequel (or a rendition of Midler’s “I Put A Spell On You,” sadly), but there are funny sound effects and cute squeaks. Your kids — and you, let’s be honest — will love it.

You can watch Hocus Pocus: As Told By Chibi on YouTube here or below.

Chibi is a Japanese word meaning “small” and is generally an endearing word associated with cuteness, according to Dictionary.com. It also refers to a specific type of anime character with exaggerated heads. Disney has a whole series of Chibi Tiny Tales on Disney Channel and on Disney+, where “the adventures of Disney characters are presented in Chibi style,” according to the official logline.

Other Chibi-style stories from the series include Phineas & Ferb, Ducktales, ZOMBIES, Tangled, Descendants, High School Musicalm, Moana, and more. There are even several from Halloweentown, featuring Marnie and the rest of the Cromwell witches. They are all so cute and short enough to keep your kids entertained!

More Like This
Watch An Exclusive Sneak Peek At 'The Amazing Maurice'
Marcel The Shell Is Heading To The Oscars!
The Purple Wiggle Is A Total Thirst Trap & Moms Are Drinking Him Up
Exclusive: Watch How A Group Of Princesses Save The Day In Netflix's New Animated Series
What Parents Are Talking About — Delivered Straight To Your Inbox