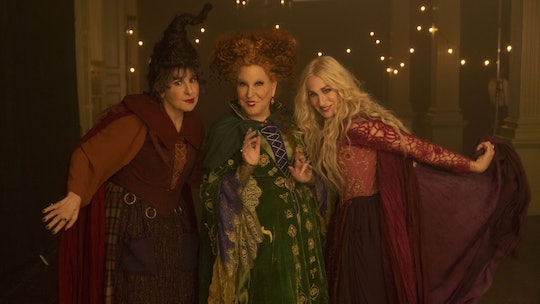 How Old Are The Sanderson Sisters In Each Hocus Pocus Movie?

Draining the life forces from children really does the most to make you look younger!

The Sanderson Sisters from Hocus Pocus have been a part of our Halloween traditions for almost 30 years, but in the movie, they are much older than that. Forget luxury face creams and expensive injections: Draining the life forces from children really does the most to make you look younger! Winnie, Sarah, and Mary Sanderson (played by Bette Midler, Sarah Jessica Parker, and Kathy Najimi, respectively) have nailed this tricky practice, as they’ve managed to look amazing despite being hundreds (!!) of years old. (Instagram filters could never.)

So how old is the witchy trio? When Max, Allison, and Dani light the Black Flame Candle in the first movie, the sisters re-appear looking like beautiful 30-somethings. However, they don’t know what trick-or-treating is (which was invented in the ‘30s), and in the second film, they don’t know what Walgreens is (founded in 1901), so they are at least over a hundred years old. Let’s take a look at clues from Hocus Pocus and Hocus Pocus 2 to get a clue on the ages of the bewitching sisters. (Note: spoilers ahead!)

Hocus Pocus 2 begins with a flashback to the Sanderson Sisters before they became witches in the year 1653. As the eldest, Winnie is set up in an arranged marriage by the Reverend. She didn’t want to get married, so she and Mary and Sarah ran into the forest, where the Mother Witch (played by Hannah Waddingham) granted them the Magic Book and their witchy lives began.

The movie doesn’t say exactly how old the young sisters are, but we know that at least Winnie was old enough to consider marriage. At the tine, most men married in their early-to-mid-20s, while some girls got married as young as 15, according to the World History Encyclopedia. So you can see why she wasn’t ready to settle down. Additionally, many women gave birth to 10 to 15 children in her lifetime (another fate Winnie probably was keen to avoid, because yikes!).

In the flashback at the beginning of the first Hocus Pocus, the Sanderson Sisters brew the life potion to regain their youth, as they are very old women at the time. If Winnie was around15 in 1653, that would make her just 55 years old in 1693, with Mary and Sarah being a few years younger (maybe 54 and 50, respectively). That is decidedly not old (no matter what my kids say!) in today’s standards, but back then? It was past your prime for sure.

According to data from England and Wales, the life expectancy of women at 15 years from 1480-1679 (which would include 1653 when Winnie was assumed to be 15), was age 48.2 years old. This definitely fits with the storyline, although some really good night cream would have done wonders for her.

The Sanderson Sisters used the life force from a young Emily Binx in Hocus Pocus to appear younger before they were hanged. When they were brought back to life in 1993, they drank from the potion and appeared young again. At this point, Winnie would be about 355 years old, Mary about 354, and Sarah about 350.

They still looked amazing in 2022.

When Winnie, Mary, and Sarah returned in 2022 in Hocus Pocus 2, they looked older, yet still gorgeous. Winnie would have been about 384 years old, with her younger sisters creeping closer to their 400s as well at 383 years old for Mary and 379 years old for Sarah. Not exactly spring chickens, but they look better than ever!

These women deserve a nice hot bath and a strong drink. They’ve been witchin’ for centuries, so they need a break!