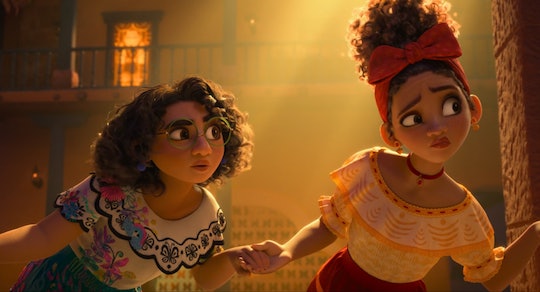 'We Don't Talk About Bruno' Just Went #1 *In The Country*

We know we’re not supposed to talk about Bruno, but we can’t seem to help singing about him an awful lot these days. The song, “We Don’t Talk About Bruno” is No. 1 on the Billboard Hot 100. Written by Lin-Manuel Miranda, it is the Hamilton’s director first Hot 100 No. 1 and has been streamed almost 35 million times, Billboard reports. “Bruno” also features the most artists credited on a number one song.

According to Billboard, the last Disney song to strike Billboard gold like was “A Whole New World” from 1993’s Aladdin.

If you haven’t seen the film yet, first of all, do so: it’s great. Secondly, you should know that it’s set in a magical, protected village in Colombia and tells the story of the loving, civic-minded, but somewhat dysfunctional Madrigal family, whose “miracle” founded not just their village haven but their sentient, architecturally impossible house, “Casita.” But their miracle didn’t stop there: as they grew, each member of the family was imbued with a special gift. Superhuman strength, shapeshifting, controlling the weather... every member of the family, that is, except Mirabel, our cheerful, plucky heroine. The story comes to life with sumptuous animation (OMG guys, you could spend all day just looking at all the characters’ hair!) and music and lyrics by Lin-Manuel Miranda, who, in addition to being the genius behind the Broadway hit, Hamilton, also wrote the songs for Disney’s Moana.

In Most Cases, A Subscription To A Streaming Service Is Your Best Bet

You can listen to the Encanto soundtrack for free

You’ll just have to hear the occasional ad for the privilege. Spotify requires a subscription, but even an unpaid subscription will give you access to Spotify’s Encanto Official Play List. Similarly, YouTube, YouTube Music, and Walt Disney Record’s Soundcloud all have Official Encanto Play Lists, which you can access for free.

You can buy the soundtrack

The Encanto soundtrack is also available digitally and in “hard copy.” Download the complete soundtrack for $7.99 on iTunes or Amazon. If you’d like to kick it old school, you can pickup the CD from a variety of retailers, including Target, Walmart, and Amazon. If you want to kick it really old school you can preorder the vinyl (it’s having a moment, people, and we get it – records are satisfying) on Disney Music Emporium, as well as the aforementioned retailers ahead of its mid-April release.

More Like This
The New Avatar Movie Will Tell A Family-Centric Story & It Looks Amazing
The Best Family-Friendly Movies To Get You In The Mood For Summer
Are You There God? It’s Me, Margaret Is Finally Heading To The Big Screen
Zac Efron Was Asked If He Wants Kids & His Hilarious One-Word Answer Says It All

This article was originally published on Jan. 18, 2022