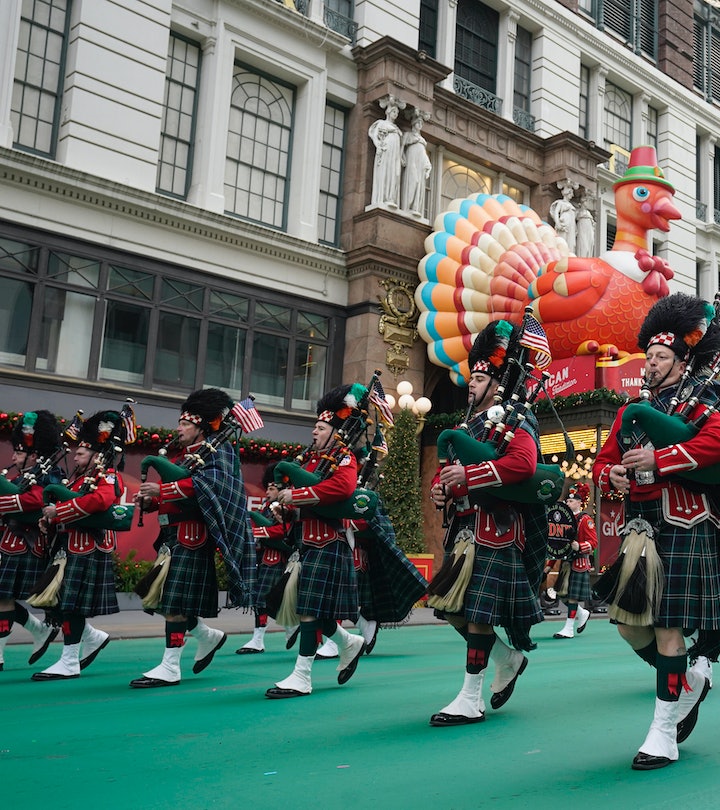 How To Watch The Macy's Thanksgiving Day Parade In 2022

Nothing says Thanksgiving like a turkey leg and ginormous Bluey balloon.

After the turkey has been carved and the stuffing scarfed down, watching the Macy’s Thanksgiving Day Parade on TV is a time-honored tradition that many families look forward to year after year. From the huge balloons soaring through the sky to the exciting musical performances, the holiday parade gives people around the world the chance to experience one of the Big Apple’s biggest spectacles. Kids are especially psyched to see their favorite cartoon characters float through the clouds as the huge crowds cheer them along. Whether you happen to be in New York City this fall, or you’ll be hunkered down in your cozy den watching the parade on the couch with your family, there’s no denying that you’ll love being a part of all 2.5 miles of entertainment, balloons, floats, and fun.

How to watch the Macy’s Thanksgiving Day Parade in 2022.

Unless you’re planning a trip to Manhattan, and you’re also willing to brave the cold city weather, you’ll have to watch the parade on TV or online. To make the broadcast feel like one big celebration and catch all the talented showstoppers, you can join the watch party on NBC or stream the parade on Peacock Thursday, Nov. 24 at 9 a.m. to 12 p.m. in all time zones. NBC will also air an encore telecast at 2 p.m. EST.

What new floats will debut at the 2022 Macy's Thanksgiving Day Parade?

In addition to a full line-up of familiar animated faces and fun fall symbols (like giant acorn balloon that’s so big it could actually fit 15 million real acorns inside), there are some exciting new updates for the 2022 parades:

Who is performing at the 2022 Macy’s Thanksgiving Day Parade?

As if 12 high school and college marching bands from across the U.S. and Mexico isn’t enough to pump up the crowd, this year’s parade will also feature a float-load of major stars and celebs. Included in the list of amazing singers to sing in the crisp Manhattan air: Ziggy Marley, Joss Stone, Gloria Estefan, Jordin Sparks, and Betty Who.

There’s even parade-theme S.T.E.A.M activities you can try out at home.

For those parents who are hoping for an educational tie in to the parade, the Macy’s Thanksgiving Day Parade has got you covered! The official parade website even offers cute downloadable resources like parade math practice, where kids can add and subtract turkeys. There’s also cool videos from the Parade Team, demonstrating how to infuse science, technology, engineering, art, and math concepts into this magical experience.

Whether you’ve been watching the parade with your family since forever, or you’re introducing this new holiday tradition to your little ones for the first time, the Macy’s Thanksgiving Day Parade will definitely not disappoint. There’s really nothing like a bunch of skyscraper-sized balloons to remind you of the awe and excitement of being a kid.