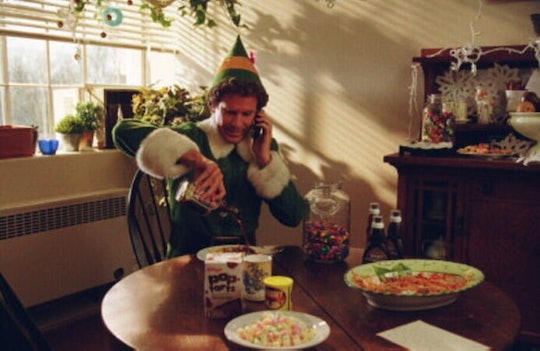 How To Watch Elf This Holiday Season

Whether you’re a North Pole or a South Pole elf, watching Will Ferrell as the biggest elf of all has become a must-do, holiday tradition for countless families. Since its premiere in 2003, the movie Elf has become a Christmas favorite. But where can you watch Elf this holiday season? Here’s everything you need to know.

Elf Is A Christmas Classic

Elf is about a man, named Buddy, who has been raised by elves, after crawling into Santa’s bag one Christmas Eve as a baby. He leaves the North Pole to search for his birth father in New York City. Once he gets there he discovers his father, played by James Caan, is on Santa’s naughty list and his 10-year-old brother doesn't believe in Santa Claus or elves. Buddy’s mission quickly goes from a family reunion to saving Christmas. There’s a little something for everyone to like about this movie; from syrup-coated spaghetti to Christmas Story cameos. And it’s probably the only time you’ll ever see the Anchorman star in yellow tights.

Below are the ways you can watch Elf for the 1000th time this year because if you’re at this article, we’re pretty sure you’ve seen it at least 100 times! If you deny, “you sit on a throne of lies!”

Stream It On HBO Max

HBO Max subscribers can stream Elf whenever they’d like. Subscriptions for the streaming service start at $9.99 a month.

You Can Also Rent Elf

If you don’t have HBO Max or prefer to you can also rent Elf for $3.99 on Amazon Prime Video, Google Play, Vudu, and YouTube.

Watch It On Starz

If you have Starz, mark your calendars. According to TV Guide, Elf airs on Dec. 18 on Starz at 7:36 a.m. and 4:42 p.m. EST. You can also stream Elf via the Starz app and website. You can access Starz free for one week as an add-on to your Hulu subscription.

I know what you’re thinking, “son of a nutcracker!” that’s not a lot of options but it’s enough to keep you from cramming 11 cookies into your VCR. Happy watching!

More Like This
20 Incredible Movies To Watch With Your Family During Black History Month & Beyond
Marcel The Shell Is Officially An Oscar-Nominated Movie Star
Marcel The Shell Is Heading To The Oscars!
Pixar’s 'Turning Red' Is Nominated For An Oscar — Here’s How To Watch It Right Now
What Parents Are Talking About — Delivered Straight To Your Inbox