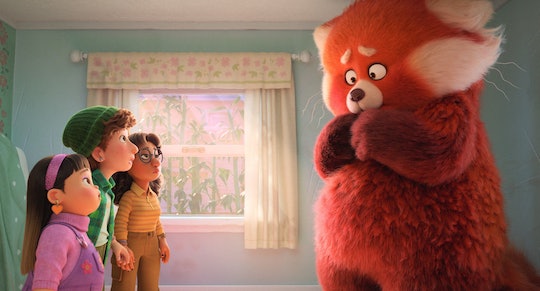 Director Domee Shi’s animated feature is getting the attention it deserves!

Pixar’s hilarious animated feature length film Turning Red tells the story of Mei Lee, a Chinese-Canadian teen struggling to break free from her overprotective mom and dealing with those adolescent hormones that really change her. I mean, really change her. Into the cutest red panda you ever did see. And for anyone who came of age in the early 2000s, it’s a potent dose of Millennial nostalgia and in its own way, a love letter to being a hormonal young girl. And once you’ve watched Turning Red, you’ll see it deserves all of the accolades being heaped on it.

Turning Red has been nominated for an Oscar.

Turning Red has been nominated for best animated feature, the second nomination for Canadian director Domee Shi. Shi won an Oscar in 2019 for her animated short Bao, a beautiful and emotional story of a Chinese-Canadian mother finding comfort after her only son has moved out of the house. Shi clearly has a talent for hitting those emotional milestones with humor and empathy.

How to watch and where to stream Turning Red.

Turning Red is available to stream on Disney+. While the original plan was for Turning Red to premiere in movie theaters, Disney announced in January 2022 that the movie would instead launch on its streaming service Disney+ due to “delayed box office recovery.”

“Young actress Rosalie Chiang lends her voice to Mei Lee, a 13-year-old who suddenly ‘poofs’ into a giant red panda when she gets too excited (which is practically ALWAYS),” the official synopsis of the movie reads. “Sandra Oh voices Mei Lee’s protective, if not slightly overbearing mother, Ming, who is never far from her daughter — an unfortunate reality for the teenager.”

Here’s your chance to get a glimpse at Canada without all of those pesky flights and border crossings. Turning Red is set in Toronto, and the movie features amazing little Easter eggs to give viewers a sense of what the city looks like. Chinese-Canadian director Domee Shi, who also directed the Disney+ short Bao, told Yahoo! in 2019, “I don’t see Toronto really depicted a lot in movies and if I do, it’s always disguised as another city, and I just wanted to pay homage to my hometown.” As red panda-Mei jumps from rooftop to rooftop, so too can your family get a birds-eye view of Toronto.

In the behind-the-scenes documentary about the making of the film called Embrace the Panda: Making Turning Red (also available on Disney+), the creators offered insight into production, and one quick shot recently captured Twitter’s attention. A board full of post-it notes shows brainstorming ideas for the film’s title.

There were lots of red, red panda puns (get it, Family TAIL), and plenty of menstruation innuendo (a theme in the movie) to go around. But we must say that while we’re partial to My Neighbor Toronto and Notorious R.P.G. (Red Panda Girl). But Turning Red was definitely the best choice in the end. And now it’s heading to the Oscars.

More Like This
Freeze! The Single From The New 'Bluey' Album Just Dropped
Watch An Exclusive Sneak Peek At 'The Amazing Maurice'
Marcel The Shell Is Heading To The Oscars!
Marcel The Shell Is Officially An Oscar-Nominated Movie Star
What Parents Are Talking About — Delivered Straight To Your Inbox

This article was originally published on Jan. 11, 2022