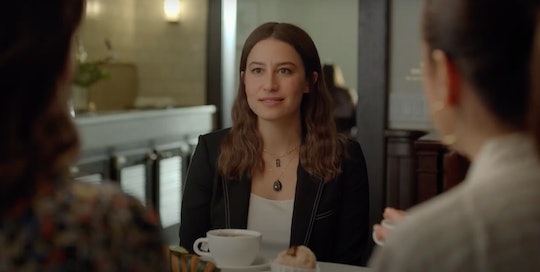 False Positive Leans Into The Body Horror Of Pregnancy And Boy, Does It Work

When I finished watching a screener of False Positive a few weeks ago, I immediately texted half a dozen mom friends while inwardly screaming. “It’s...a horror movie?? I think?! It’s satire?? Maybe?”

Longtime Ilana Glazer fans might find themselves as pleasantly disoriented as I was watching the beloved actress play it straight. If False Positive exists in the same universe as Broad City, Lucy might be the yuppie breeder older sister who works at an ad agency and takes Ilana Wexler out for overpriced grain bowls in exchange for trendcasting ideas.

The media properties may share a city, and a leading lady, at their center, but they could barely be more tonally different. False Positive is the kind of film where the fewer expectations you bring to it, the better. The appeal is in letting the slow-dawning, not-quite-rightness wash over you as it moves from scene to eerie scene.

Take this exclusive clip, with Lucy (played by Glazer) and in a bourgie coffeeshop for her new “mommy group,” talking to Sophia Bush and others about getting access to a highly-sought-after fertility clinic, The Hindle Group (Dr. Hindle is played by none other than a gray-bearded Pierce Brosnan) where perhaps things are not as they seem, but the gals are more concerned with getting tummy tucks:

Note the women in their multiple delicate necklaces, florals, and structured blazers, note that saccharine-sincere, breathy tone of voice, note the women hugging their decaf lattes —all of it anchored in a reality that is totally plausible, with the dial moved just slightly off-center and over-the-top. It’s not the Glazer we know but her observant wit and wicked humor is threaded subtly throughout.

Subtle that is, until the film crescendoes, and then, boy howdy, you might find yourself running into the other room and trying to explain what just happened to anyone who will listen. For instance, to your therapist.

One might find themselves unable to get the fact that Glazer co-wrote the screenplay, and is pregnant now, out of one’s head. If you find yourself in this position, please text me immediately.