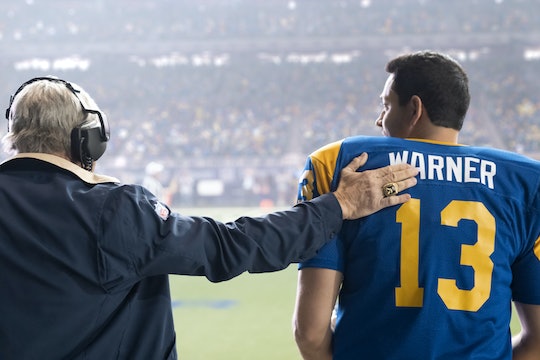 It’s an amazing story. A grocery store stock boy becomes an NFL quarterback, not to mention two-time MVP, in the space of a few short years. It’s the kind of story a person might imagine being dreamed up by Hollywood for a feel-good, inspirational movie about the power of perseverance and hope. And yet, American Underdog: The Kurt Warner Story was not, in fact, invented by movie makers. It’s based on the true story of St. Louis Rams quarterback Kurt Warner and his family.

The Movie Goes Back To Kurt Warner’s Roots

The title character of the movie, Kurt Warner, grew up as one of three boys raised by a single mom in Cedar Rapids, Iowa. Kurt played football in high school, before playing at the University of Northern Iowa, a Division 1-AA school where he did not get drafted to the NFL. Instead, Kurt found work at a local grocery store as a stock boy for $5.50 an hour, but he never gave up on his dream to play football. He continued to train, eventually playing quarterback for the Iowa Barnstormers in the Arena Football League. There, he was discovered by the St. Louis Rams, eventually playing in three Super Bowls during his NFL career.

Directors Were Inspired By His Wife & Their Relationship

This is the stuff of movies. And this is the story of Lionsgate’s American Underdog: The Kurt Warner Story, starring Zachary Levi as Warner, which hits theaters on Christmas Day. The film was directed by brothers John and Andrew Erwin, who was himself an ESPN camera operator before deciding to direct this movie.

What was it about Kurt Warner that compelled Andrew Erwin to want to tell his story? Well, his wife Brenda, played in the movie by Anna Paquin, had a whole lot to do with it. “I just watched how he interacted on the sidelines with this spiky haired, tattooed Marine, beautiful lady in the stands, and that was his wife Brenda,” Erwin told Deseret News. “The partnership between those two, I was like, ‘I want to know the story behind that.’”

Kurt Warner has been married for 29 years.

Kurt met his future wife Brenda Meonio when she was a single mother of two and he was a still in university. The couple met at a line dancing event, and Brenda admitted to People that she was “not interested” in finding love when she met her future husband. “I did not want to meet a man. I was going to nursing school. I was discharged from the Marine Corps, a single mom, on food stamps. It was a tough time in my life,” she told the magazine.

Kurt eventually found his way to Brenda’s heart, and the pair married in 1997, moving into Brenda’s parents’ basement along with her two kids, Jessie Jo and Zachary, who suffered a brain injury as an infant that left him legally blind. Kurt adopted both children and became a husband and stepdad in short order.

On Being A Stepdad

Kurt Warner is an amazing stepdad.

As a man who was raised by a single mom himself, Kurt shared in a recent interview with Romper that he was “very cognizant” of wanting to represent a positive narrative as a stepdad. “I saw that firsthand, my mom not being able to have relationships that she probably deserved because the man wasn’t ready to be able to handle someone else’s kids,” he said. “I believe watching my mom and knowing that was probably a big reason why Brenda and I are together.”

Kurt & Brenda Are Proud Parents Of 7

Kurt Warner is a dad of seven.

The couple, who have been together for 29 years, went on to add five more children to their family; 24-year-old son Kade, 21-year-old daughter Jada, 19-year-old son Elijah, and 15-year-old twins Sierra and Sienna. They’re also grandparents of two.

That’s a whole lot of love in one family. If you need a little pick-me-up this holiday season, American Underdog: The Kurt Warner Story is for you. In theaters across the country on Dec. 25.

More Like This
'Hocus Pocus 2' Officially Has A Release Date To Look Forward To
Kristen Bell Just Hinted That 'Frozen 3' Is Maybe (Hopefully!) In The Works
Here’s What The Voices Behind The Characters Of Lightyear Look Like In Real Life
Emma Thompson Shotputs A Child As Miss Trunchbull In The Matilda Musical Trailer