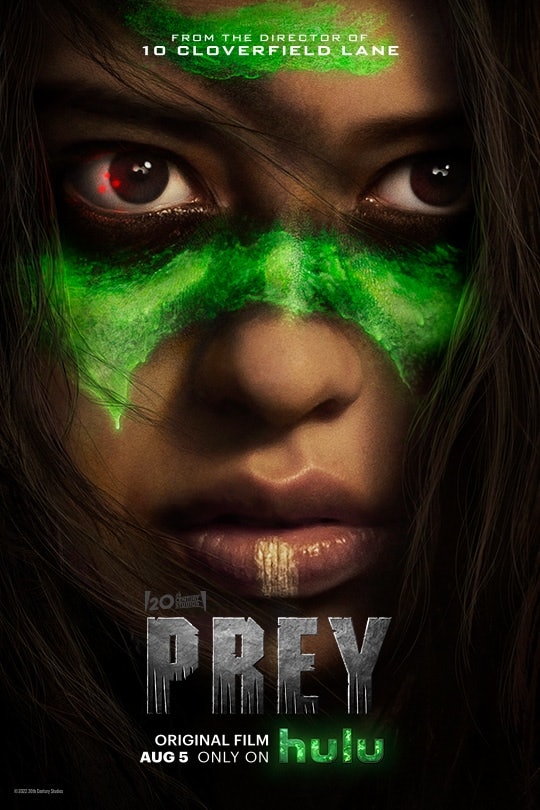 What Parents Need To Know About Hulu's Predator Prequel Prey

For those of us who saw the original Predator starring Arnold Schwazenegger back in 1987, Hulu’s new prequel Prey is already high on the must-watch list. It is an origin story that feels fresher than the first because of its magnetic main character and stripped down storyline. But is this one of those nostalgia picks parents want to watch with their kids? Here’s what parents need to know.

A new heroine fights an ancient villain in Hulu’s Prey.

In Prey, young Comanche hunter Naru (played by newcomer Amber Midthunder) is ready to become a full warrior by heading out for her a tribal rite of passage called the “kühtaamia,” where the hunter hunts another hunter. Naru tries her hand at hunting a bear, but finds there is another, unseen hunter in the woods. When a child is taken from her village and Naru joins her brother Taabe (played by Dakota Beavers) along with other warriors to return them, they meet this new hunter they can’t understand. Naru finds herself trying to survive in the forest as she runs into dangerous colonizers and, of course, the alien Predator.

Is Prey appropriate for little kids to watch?

In a word? No. Prey is full of gore and violent deaths, with tigers and bears attacking people as well as characters dying in especially graphic manners. Think spikes through the skull and arrows to the eyes, as Common Sense Media explains.

That being said, there’s a lot to recommend it for older kids.

Director Dan Trachtenberg flipped the traditional action movie trope of a tough guy lead on its head by making Naru the main character of Prey. It’s an important moment for the franchise and it doesn’t stop there. Much of the cast is made up of indigenous actors and this level of representation is another sign of change for action movies. So yes, there’s a lot of violence and gore and scary imagery. But there’s also a strong female lead and representation. Perhaps you and your teen can hang out and watch it one night.

What is Prey rated?

Prey is rated R or 16+ for strong, bloody violence. Parents reviews on Common Sense Media, however, rated the movie as appropriate for kids over 10 years old. Parents know their kids best, of course, so check out the trailer to get a sense of the action and violence in store.

Where can you watch Prey?

You can stream Prey with a Hulu subscription. Then if you and your teenager want to watch the original Predator movie where it all began, that’s also available on Hulu.

More Like This
The Little Vampire Is Just Scary Enough
Watch An Exclusive Clip From Trick or Treat Scooby-Doo!
'Squid Game' Is Coming Back For Season 2 On Netflix: Here’s What Parents Need To Know
The Addams Family Is Not Exactly As Kid-Friendly As You Remember