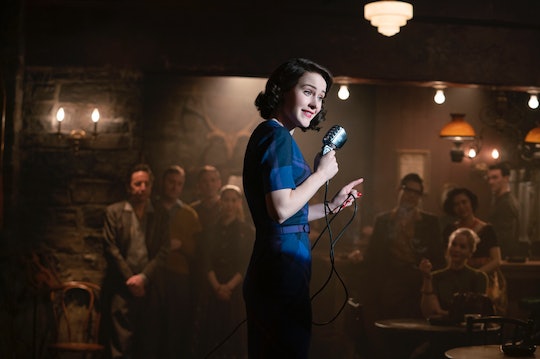 Is The Marvelous Mrs. Maisel Appropriate For Kids? Here’s What Parents Should Know

It’s rated TV-MA for a reason.... So, tits up and watch Midge’s act after the kids go to bed!

There’s just something about The Marvelous Mrs. Maisel on Amazon Prime that begs to be watched over and over again. The period outfits worn by Midge (played by Rachel Brosnahan) are stunning enough alone to warrant a second, third, and fourth look. With Season 4 just around the corner, now is the time to reacquaint yourself with the whole show. And while you might be tempted to watch The Marvelous Mrs. Maisel with the kids based on the fun vibe and lively dialogue alone, press pause. It’s really, deeply not for little ones at all.

The Marvelous Mrs. Maisel Is About A Mom Who’s Ready To Make It Big

The Marvelous Mrs. Maisel follows Midge, first newly married and ready to live that pot roast lifestyle in Manhattan with her gorgeous apartment and two small children. Then taking a U-turn after her husband Joel (Michael Zegen) leaves her for another woman. Midge uses her heartbreak and turns it into comedy almost accidentally, discovering she’s a gifted stand-up comedian. Talent agent Susie Myerson (Alex Borstein) agrees, and the two women decide to see how far they can take Midge’s act, which can get hilariously vulgar. And that’s just one of the reasons you don’t want your kids watching.

The First Three Seasons Have Been Rife With Adult Situations

One of the greatest elements of the Emmy-winning series created by Gilmore Girls’ Amy Sherman-Palladino are all of the side plots. Midge’s parents Abe (Tony Shalub) and Rose (Marin Hinkle) are fascinating, just as every story within the story is fascinating. But all of those stories are about adult situations: complicated, sexual, political, you name it. Hilarious situations, yes, but meant most specifically for adults. Or, at least, for people who are older than 15 years old.

Common Sense Media notes that The Marvelous Mrs. Maisel has a very strong female lead and an inspirational message. Midge is determined to be a success regardless of any impediments, and back in the ‘50s and ‘60s there were considerable impediments for a woman who wants to pursue a career in comedy. Midge and Susie have a great friendship that is about more than discussing their romantic relationships, which is always wonderful to see on screen.

That being said, there are a lot of comments about weight that could be damaging for kids to see. Midge frequently measures herself to ensure she hasn’t gained any weight, while her mom Rose is especially harsh about weight and makes comments about people’s bodies regularly.

The Marvelous Mrs. Maisel is rated TV-MA, based on nudity and language. The very first episode, for example, sees Midge show her breasts during an act on stage, but to be honest, it was kind of empowering. Still, there is a lot of swearing throughout the series that probably isn’t appropriate for young ears.

Perhaps because of the time period, there’s a lot of smoking and drinking going on, especially when Midge is performing at night clubs. Not exactly what people might want their kids to watch.

My advice? Put the kids to bed, make yourself some ‘50s style appetizers and rewatch The Marvelous Mrs. Maisel as it was meant to be seen. Kid-free.

Season 4 of The Marvelous Mrs. Maisel premieres on Feb. 18 on Amazon Prime