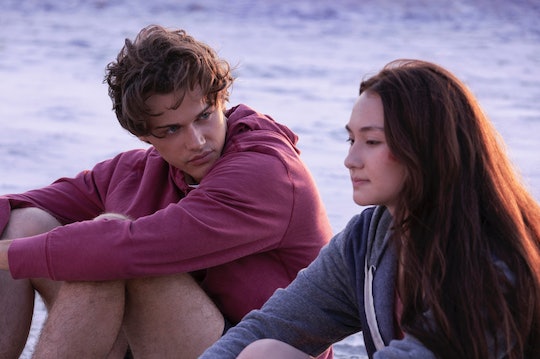 The new series by Jenny Han is now streaming on Prime Video.

Summertime is more than a season. It’s full of long, winding days that can take you anywhere. Sunshine and swimming and popsicles and sleeping in and falling in love. It’s magic — and it’s captured so perfectly in The Summer I Turned Pretty on Amazon Prime Video. This new romantic drama is based on the book of the same name by Jenny Han, the bestselling author of To All The Boys I’ve Loved Before. Before you dive in with your kids, there are a few things you should know about the series. (Note: spoilers are ahead.)

The Summer I Turned Pretty is a coming-of-age series with a love triangle.

Love triangles are a classic teen trope (looking at you Twilight), and The Summer I Turned Pretty masters this. The show is a “multigenerational drama” about Belly (Lola Tung), her mom Laurel (Jackie Chung), her brother Steven (Sean Kaufman), who visit her mom’s friend Susannah (Rachel Blanchard) at her summer home in the made-up town of Cousins Beach in Massachusetts.

Every year, Belly and Steven hang out with Susannah’s sons Conrad (Christopher Briney) and Jeremiah (Gavin Casalegno). But the summer Belly turns 16, everything changes. Suddenly, she’s seeing her friends in a new light — and they are noticing her in ways they never have before.

The series “hinges on a love triangle between one girl and two brothers, the ever-evolving relationship between mothers and their children, and the enduring power of strong female friendship,” according to the series’ official logline. “It is a coming-of-age story about first love, first heartbreak, and the magic of that one perfect summer.”

Explicit language includes “f-ck,” “f-cking,” “sh-t,” “a—hole,” and “bullsh-t,” according to Common Sense Media. In one scene, a girl jokingly calls another a “dirty little slut” for wanting “hot makeout session” with a boy. Additionally, there is a lot of flirting, kissing, and dating between the characters.

Many of the characters drink alcohol to excess, sometimes slurring their words, and acting unsteady and clearly inebriated. There are parties where underage kids attend, although it’s sometimes hard to tell if the ones drinking alcohol are of legal age. The series also contains many instances of smoking pot (even the moms indulge). One scene has a fight between two boys, and Belly is hit in the face accidentally.

Characters of diverse backgrounds are represented.

Diverse representation is big in this series, with Belly and her family being of Asian heritage, a character who is attracted to boys and girls included, and different wealth backgrounds are mentioned.

The Summer I Turned Pretty is rated TV-14.

This rating comes from language, sexual references, and teen partying.

Overall, it’s a beautiful story about growing up. Belly is the sweetest character who is trying to figure out a balance between being a kid and becoming a woman, taking risks, making mistakes, and falling in love. It’s a positive, romantic series with a great soundtrack — including songs by Taylor Swift, Olivia Rodrigo, Pheobe Bridgers, and more — that parents will enjoy as much as their kids. But because of the adult themes, according to parent reviews on Common Sense Media, you might want to wait until your kids are at least 12 or 13 before watching with them.

More Like This
What Parents Need To Know About Marvel's New She-Hulk Series Coming To Disney+
Reese Witherspoon’s Son Deacon Is Officially An Actor & Is Working With One Of His Mom's Besties
The Worst Fake Babies In The History Of Movies & TV
10 Cozy, Romantic, & Drama-Filled Shows To Watch If You Love 'Virgin River'