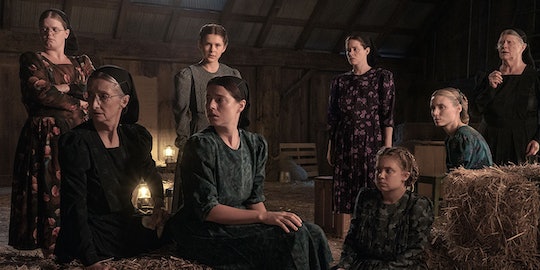 The Sarah Polley-directed film been nominated for a Best Picture at this year’s Academy Awards.

Content warning: This article discusses sexual abuse and violence that may be triggering or upsetting to some readers.

Women Talking is an intense, thought-provoking movie about a group of Mennonite women who have been brutalized by local men. As the men who brutalized them are being bailed out by other men in the community, the women convene to discuss how they can move forward. Do they run? Do they fight? How exactly do they move forward? And, perhaps most importantly for the viewer, is Women Talking based on a true story? Sadly, yes, the movie is loosely inspired by real life events. Here’s what you need to know about Women Talking.

Women Talking has been nominated for two Oscars.

Women Talking was nominated for two Oscars, one for Best Adapted Screenplay for Canadian director Sarah Polley and one for Best Picture. Polley was not nominated for Best Director despite being praised for her amazing adaptation, which was especially surprising considering the sensitive content she had to contend with in the film.

The story behind Women Talking

The Polley-directed film Women Talking — starring Rooney Mara, Claire Foy, and Frances McDormand, to name a few — was actually adapted from the novel of the same name by Miriam Toews, a Canadian writer who herself grew up in a Mennonite community in remote Manitoba province. But the original idea behind Toews’ 2018 novel was loosely based on a horrific story from a Mennonite community that took place from 2005 to 2009 in Manitoba Colony, Bolivia.

During that time, a group of men, Mennonites themselves, drugged and raped 151 girls and women between the ages of 5 and 65 years old. When they were eventually discovered, the members of their community sought to deal with them within the structure of their own colony but were eventually pressured into handing the men over to Bolivian police. Seven men were eventually sentenced to 25 years in prison in 2011, according to the BBC, with one man sentenced to 12 years for providing the drugs used to incapacitate the girls and women. A ninth man evaded capture completely.

As horrific as the crimes themselves were, the film and the book it was based on don’t delve into describing what those girls and women went through. Instead, Toews told the New Yorker that she chose to imagine how those women might have responded. Toews wrote her seventh novel as though it were the official minutes from the meeting between these women, written by a man since the women themselves were never allowed to speak English (they speak an ancient version of Low German), read, or write.

The Mennonites are considered a pacifist community, but Toews (and Polley in the recently released film version) wondered if there might not be a thirst for revenge. Anger. And perhaps even a questioning of their faith. Claire Foy, who plays Salome in the film, told Newsweek that she believed this sensitive material was “in the right hands.” She added, “It’s been directed by Sarah, who is extraordinary, and Dede [Gardner] and Frances [McDormand] have produced it, and I don’t think you could get a better group of creative people to make this film responsibly and sensitively.”

When does Women Talking premiere?

Women Talking released in select theaters on Dec. 23 and a wider, nationwide release happened on Jan. 20. The movie has been receiving critical acclaim across the board. It’s definitely one you are not going to want to miss.

More Like This
'Women Talking' Overwhelmed Me With Grief — And A Sense Of Possibility
Watch An Exclusive Sneak Peek At 'The Amazing Maurice'
Marcel The Shell Is Heading To The Oscars!
Pixar’s 'Turning Red' Is Nominated For An Oscar — Here’s How To Watch It Right Now
What Parents Are Talking About — Delivered Straight To Your Inbox

This article was originally published on Jan. 7, 2023