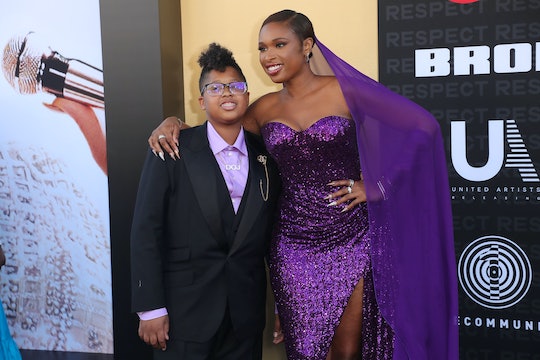 Where has the time gone?!

Jennifer Hudson’s little man is not so little anymore! The “Spotlight” singer’s son, David Otunga Jr., is a teenager now and, according to his mother, he has a style and individuality that’s all his own these days.

“Whew child. Being a mom to a teenage boy. I feel like I have a new child at 13,” the Respect star told People this week at Glamour's Women of the Year Awards. While it’s certainly an adjustment, Hudson explained that she’s stepping back and allowing her son to grow into himself.

“Like he has his own swag now, his own plans and ideas ... You know, because he's older now, he's more independent and it's like, well this is what we want them to be,” Hudson told the magazine adding that she wants him to feel “confident enough to let him come into his own.”

Hudson shares David with her ex-husband, professional wrestler, David Otunga. The couple split up in 2017 after being together for 10 years.

During a recent interview with Kelly Rowland on her talk show, The Jennifer Hudson Show, Hudson and the Destiny’s Child star shared how they felt their late mothers’ presence as they raised their kids. Hudson’s mother, brother, and 7-year-old nephew were killed in 2008 a year before David was born. But she said her son has a lot of her late loved ones’ traits. “For me and my son like it blows my mind how much he is like my family,” she shared with Rowland last month. “It's like ‘wow how can you be so much like people you've never met?’ But that shows how strong the family genes are.”

“He reminds me so much of my brother and my mom,” Hudson added.

David turned 13 in August and to celebrate, his parents threw him a birthday party with a cake and wore shirts with his initials and the number 13 written on them. “I officially have a teenager !!!! Wow !!!!!! Turn up my baby !!!! I will forever celebrate u !!!!" Hudson wrote in her caption.

David also seems to be dipping his toes into the acting world; his first small role was in 2021 Baking Up Love, alongside his father. And aside from being a stylish and creative teenager, David also has a love for giving back and volunteer work. During an appearance on Hudson’s show, Chef Michael Airhart of Taste for the Homeless, an organization that provides meals for those in need in Chicago, spoke on the teen’s kindhearted spirit when he volunteered for him, never realizing he was the singer’s son. “He has a heart of gold,” Airhart said, “and when I say, and I'm not making this up, you know people to have that heart of gold… He was determined to serve the less fortunate. I didn't have to say nothing.”

Needless to say, Hudson is raising her son to be an exceptional young man and we can’t wait to see how he continues to blossom.