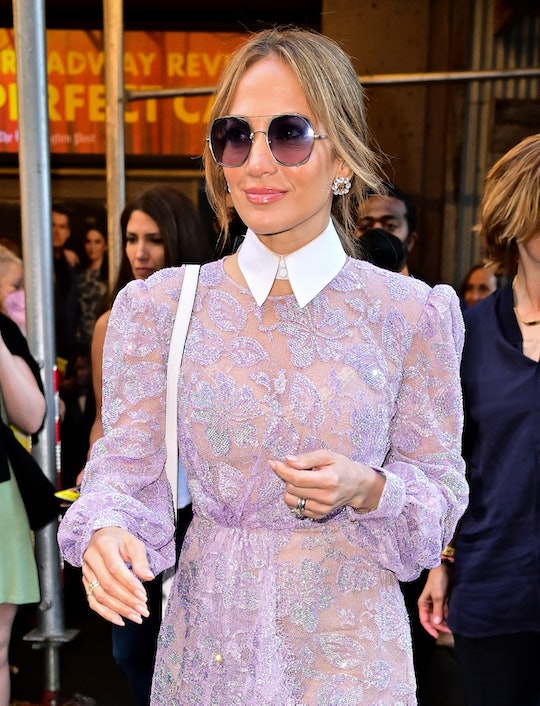 Lopez and her blended family took a musical bite out of the Big Apple together!

Jennifer Lopez and her beautiful blended family took a trip to Manhattan and hit up the bright lights of Broadway in style. The Marry Me star and singer was seen outside of the St. James theater with her child Emme Maribel as well as Violet Affleck, eldest daughter of husband Ben Affleck.

It’s no surprise that Lopez would want to expose her kids to the arts and take in a Broadway show. J.Lo is a huge fan of musicals and has famously claimed in an interview with Vanity Fair that she watched the original West Side Story 37 times as a kid growing up in the Bronx. Of course, J.Lo was drawn to the spitfire character of Anita too: “I never wanted to be that wimpy Maria, who sits around pining for her guy. I wanted to be Anita, who danced her way to the top,” she told the magazine.

Lopez exited the theater in sunglasses looking like the glowing star that she is in a gorgeous, sheer floral dress with a chic white collar. A masked up Violet Affleck, 16, was also seen outside of the theater with a Playbill in hand, twinning with her stepmom in another flowy floral look that was a bit more understated.

Lopez’s 14-year-old child Emme was also spotted in Manhattan in a much more casual jeans and T-shirt get-up, listening to some music while strolling the city streets.

While Lopez was dressed to the nines, as per usual, apparently looking that good can take a little too much time. J.Lo and her kids were reportedly over 20 minutes late to the Broadway show, according to Page Six, much to the chagrin of Broadway legend, Patti LuPone, who was also seated in the audience a few rows in front of Lopez.

With another wedding celebration on the horizon in Georgia (because one Vegas ceremony was fun, but not quite enough) let’s cut Jenny from the Block a little slack. It’s only fitting that future bride be excused for a little tardiness, especially when she’s in Mom Mode, exposing her kids to some of NYC’s finest culture and one of the hottest tickets on Broadway.