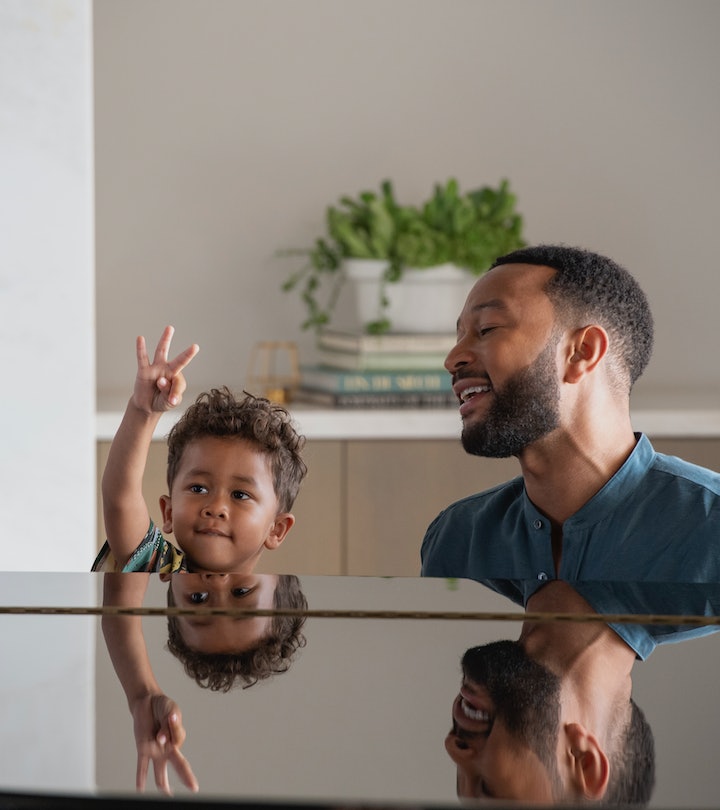 John Legend knows a thing or two about traveling with small children. Since he became a father to 5-year-old Luna and 3-year-old Miles, the “Bigger Love” singer has managed to survive flights to Bali, Thailand, Mexico, Italy, and the Maldives with kids in tow. And along the way, he’s picked up a few parenting travel hacks, such as his advice that parents toss one very important item into their carry-on: an iPad preloaded with their kids’ favorite shows and movies.

“As much as you don't want to admit it, it’s probably better to have an iPad with you, preloaded with the stuff that they like to watch,” Legend tells Romper in a recent phone interview. “You're going to want some way to keep them occupied during the trip and as much as you try to avoid screens, a screen can be helpful for that purpose.”

Legend also recommends packing your child’s favorite blanket or stuffed animal to ensure they have something comfortable to cuddle or hold when needed. “That helps because they like some aspect of familiarity,” he says.

It’s sound advice (especially if you’ve ever watched a boredom-related toddler meltdown happen 30,000 feet in the air). And, more importantly, it’s advice Legend is hoping at least a few dozen families will get to try out later this summer.

The singer, whose family was named Vrbo’s first Family in Residence in May, has teamed up with the online vacation rental marketplace to give 30 families $5,000 reunion getaways to anywhere in the United States as part of its #VrboReunionContest. (To enter, families must share a photo of themselves on Instagram or Twitter posing with the person or persons they’ve missed most this past year as well as a little bit about why they’re eager to reunite. Entries must include the hashtag #VrboReunionContest to be considered for a chance to win.)

“Hopefully we can help bring people together and allow them to enjoy each other again,” Legend says. “I know for us, it was a long time since we’d seen our relatives.” Along with hosting his sister and her children in Los Angeles, The Voice coach recently traveled back home to Ohio to reunite with family and celebrate the life of his late great-grandmother.

“We normally get together for Christmas every year or Thanksgiving and it had to be altered or done on Zoom or done another way last year,” he says. “There are a lot of people who had the same experience, so we're excited to bring people together now that it’s a little safer to do so.”

After a year of lockdowns and isolation due to the coronavirus pandemic, family reunions big or small feel somehow all the more sweeter, even for Legend, who tells Romper that Luna and Miles were “so excited” to see family. “They are so obsessed with their cousins,” he says. “They love spending time with them and they are always so excited whenever they get the chance to.”

Legend is expected to set out on his Bigger Love Tour in September. But before that, he and Teigen are planning to whisk the kids away on one last family getaway where they’ll stay in a Vrbo, of course. So, what will Legend be preloading on an iPad for his kids ahead of the trip? “Miles is currently obsessed with The Land Before Time,” Legend says. “And then Luna, she loves Scooby-Doo.”

More Like This
Ryan Reynolds Jokes His Daughters Are So “Wild,” He Thinks “They Have Rabies Sometimes”
Chris Pratt Says He "Cried" About That "Healthy Daughter" Instagram Post Controversy
Ben Affleck’s 10-Year-Old Son Samuel Test Drove A Lamborghini Right Into A BMW
Prince William Shares How He Plans To Follow In His Mother's Footsteps With His Kids