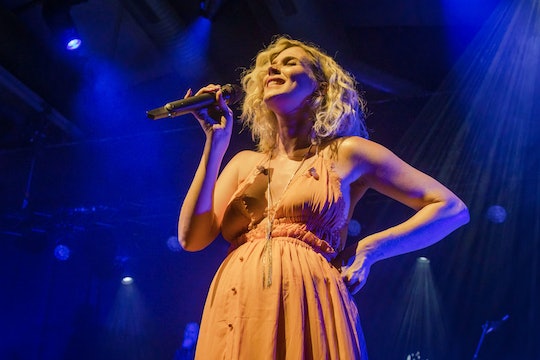 This birth story is definitely one for the books!

Grammy Award winner Joss Stone recently gave birth to a sweet boy named Shackleton. But it’s not just the baby’s unique name that’s quite surprising (the little man’s moniker is a nod to Antarctic explorer Ernest Shackleton), Stone’s birth was one for the books too. In a recent interview, the mom of two revealed she needed an emergency C-section after 30 hours of labor. And on top of that, when the baby came down the birth canal, he actually split Stone’s uterus.

In a recent interview with People, Stone shared the scary details of her incredibly rare delivery, which included a team of 15 doctors and nurses who hurried into the room as her baby’s heart rate slowed down. “He was coming down the birth canal, and when my uterus split, his head went into my abdomen and he went back up,” Stone said. “They had to bring him back to breathing again.” Also known as a uterine rupture, this complication affects less than 1% of pregnant people.

In a dramatic scene that could have come straight from an episode of Grey’s Anatomy, Stone shared how she was ushered into the operating room where a doctor told her that she’s going to sleep. “And then I woke up, I had my baby, and everything was okay,” she told People.

Despite the traumatic experience, Stone was incredibly appreciative of her medical team. “It was like having 15 angels fly into the room. They were trying to make me feel comfortable. They were very nice and professional and made me feel safe.”

The “Tell Me ‘Bout It” singer shares 21-month-old daughter Violet with partner Cody DaLuz and has shared some cute behind-the-scenes of her growing family on social media as they prepared for their new arrival. In September, she posted a video on Instagram of Violet not exactly acing her big sister responsibilities as she adorably ditched her dog walking duties. “Maybe dog walking chores are a bit much to ask at 20 months old . 😂 bless lovely Maggie. She has a heart of gold,” Stone captioned the post.

This is actually the second time Stone’s intended birth plan was thwarted. The UK’s The Masked Singer winner (yup, she was the sausage!) had hoped for a hypnobirthing experience with her first child. “It breaks my heart a little I didn’t get to have the birthing experience I had planned, Stone said. “I had to have a caesarean section because Violet was breech. I know that was a birthing experience and it was the most beautiful moment of my life, but I feel like I missed out on actually birthing like I had prepared for,” she said.

But even if things didn’t go as planned in the delivery room, Stone is clear on her next steps as a parent. She wants to prioritize her children over her career, and has said that she plans to give up touring to focus on raising grounded kids.

Even if Stone’s not hitting the road any time soon, this strong mama and soul singer isn’t giving up entertaining completely. Lucky for us, she’s gearing up to pick up the mic and perform at this year’s Macy’s Thanksgivings Day Parade. After enduring such a difficult birth, singing in the freezing cold in front of a Manhattan massive crowd should be no sweat.