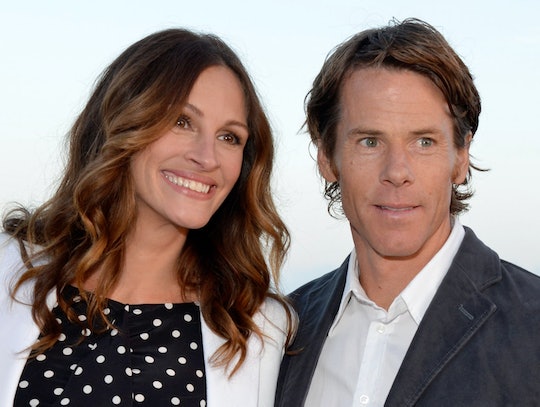 And her on-screen husband definitely agrees!

Time to fire your couples therapist and burn all of your self-help books on how to maintain the perfect relationship. There’s a new Love Expert on the block, and she also happens to be one of the most famous (and high-paid) moms in Hollywood. When she’s not busy breaking the glass ceiling, knitting, or starring in her latest rom-com, Julia Roberts has some pretty juicy advice on how to keep that spark going in your relationships. According to the pretty woman with a mega-watt smile, if you want to have a successful marriage, the secret is simple — make out! A lot.

“I always say that same thing and I'm sticking with it,” Roberts told E!. “It's making out. Lots of making out.”

Her Ticket to Paradise co-star George Clooney, who has seriously embarrassed his own kids with plenty of experience kissing Roberts on-screen, also agreed. “I make out with Danny, too," Clooney joked. The silver fox was referring to Robert’s husband of 20 years, Danny Moder. The longtime couple shares 14-year-old Henry and 17-year-old twins Hazel and Finn.

“It keeps you guys together,” said Clooney, who is also a parent of 5-year-old twins. The actor shares Alexander and Ella with his wife and human rights lawyer Amal.

Julia Roberts says her secret to a great marriage is lots of kissing.

Based on the amount of practice they’ve had with each other, Roberts and Clooney have become somewhat of amateur smooching experts. In an interview in The New York Times, the co-stars chatted about the innumerable times they locked lips on set of their latest film.

“One kiss. And we did it for, like, six months," Roberts said.

“It took 79 takes of us laughing and then the one take of us kissing,” Roberts continued.

Kissing seems to be having a moment in the celeb-o-sphere. Hailey Baldwin, wife of pop superstar Justin Bieber, also recently chatted about its importance in her relationship on the steamy Call Her Daddy podcast hosted by Alex Cooper.

When asked what the sexiest thing her husband does to turn her on, Baldwin had a surprisingly chaste response. “It can be so many different things. It can be a connection thing, it can be a physical thing. For me, kissing is a big deal,” she said. “That's a big thing for me.”

So it turns out the answer to one of life’s most complicated relationship is easier than you might think. If you want to live in marital bliss, there’s just one thing you need to do more: pucker up!