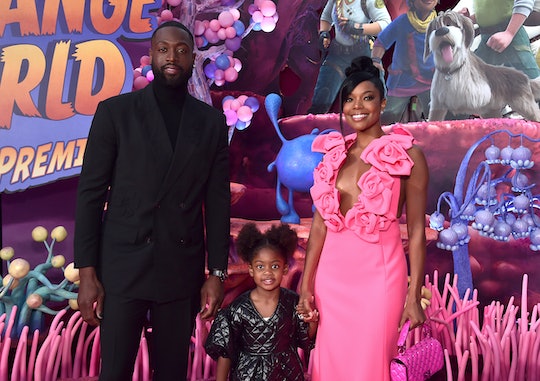 It’s always a special moment when the one and only Kaavia James hits the red carpet. The 4-year-old joined her parents Dwayne Wade and Gabrielle Union at the premiere of Disney’s Strange World on Tuesday in Los Angeles and the trio stunned in black and pink ensembles.

The Shady Baby showed up in style to support her mom’s new movie. At the event, Kaavia wore a bubbled black quilted dress from Parker and Rayne, the children’s brand shared on Instagram, Doc Marten boots, and a mini Roman Stud hot pink bag, which W Magazine reports will run you $2,590. Her dad coordinated her look in a black suit with a black turtleneck under a double-breasted jacket. Wade also rocked a pair of hot pink One Stud low-top sneakers that matched Kaavia’s purse. Both of their looks went perfectly with Union’s all-pink dress. But, let’s be honest, it was Kaavia who stole the show.

Alyssa Milano added, “Kaav is everything.”

At the premiere, the Strange World star spoke to the Associated Press about parenting Kaavia and Wade’s kids from previous relationships; Zaire, 20, Zaya, 15, and Xavier, 9. “I think we all have dreams and ideas about how we want our kids’ lives to turn out. And some of us are a little bit more, you know, insistent than others,” she said. “But in our household, we realized rather quickly that no matter what we wanted for our children, they are who they are from birth.”

She added, “It’s our job to nurture their originality and life path. And when they tell us, repeatedly, for years, who they are, it’s our job to believe them and create a safe space and a sanctuary in our home no matter what the outside noise is saying outside our doors.”

Her message definitely aligns with one of the themes of the film, which features Disney’s first openly gay teen romance in an animated feature. Union voices the character Meridian Clade in the Disney animated movie about a family of explorers who venture into uncharted territory —literally. “She gets to be a superhero in her own life,” Union said about her character while chatting with ABC’s On The Red Carpet. “And it's great to be a part of a fun, action-packed family adventure film.”

More Like This
Nick Cannon Gives In To Chaos In A Cute New TikTok With His Oldest Kids
Watch An Exclusive Sneak Peek At 'The Amazing Maurice'
Marcel The Shell Is Heading To The Oscars!
Pixar’s 'Turning Red' Is Nominated For An Oscar — Here’s How To Watch It Right Now
What Parents Are Talking About — Delivered Straight To Your Inbox