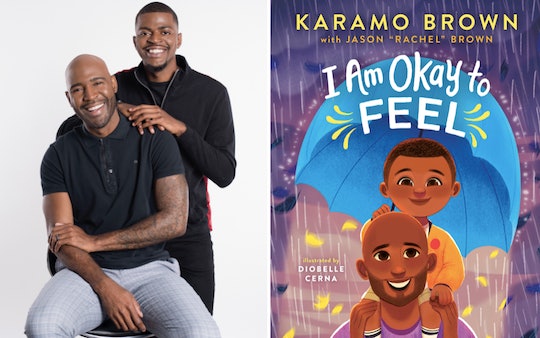 The father, activist, and Queer Eye star tells Romper “this is a book about navigating big emotions.”

You’re definitely not alone if you’ve deemed Karamo Brown your pep talk guru. The father, activist, and Queer Eye star has graced our TV screens for years now as the soulful Culture Expert on Netflix’s reboot of the beloved series. But what you might not know about Brown is that he’s also an accomplished children’s book author and has a powerful new title arriving in stores this fall. Ahead of its release, Romper can exclusively share the cover of I Am Okay to Feel.

Brown’s new book is also a collaboration with his talented son, Jason “Rachel” Brown. Always the perceptive and supportive father, Brown recognized Jason’s creativity early on and worked to nurture that talent from a young age. “I used to give him extra homework assignments after school. He complained then, but it worked and now we have two books!” Brown tells Romper. In 2019, the two published I Am Perfectly Designed, a confidence-boosting picture book to help inspire kids to be themselves.

Their newest project is a thoughtful picture book that invites children to explore and embrace their emotions. The inspiration behind I Am Okay to Feel is especially timely and will surely speak to many parents, especially those raising boys. “Growing up, I was constantly told that expressing my emotions made me weak, that I needed to be more of a man,” Brown says. “When it came to raising my sons, it was important for me to combat that toxic masculinity and to let them know that it was okay to share our feelings and to be vulnerable. We've been going through an especially stressful time, and it feels more important than ever to be able to talk about how we feel.”

I Am Okay to Feel is about a father and son who are caught in an actual storm and must learn to weather the uncertainty together. The cover perfectly captures this premise with a vivid illustration of a sweet little boy in his knee high socks, holding a bright blue umbrella and sitting on the shoulders of his beaming father. Brown might be covering familiar territory here, as the proud dad of two embarked on his own stormy journey to fatherhood in an especially unusual and surprising way.

Collaborating on this project with his son also impacted their relationship in a positive way. “This is a book about navigating big emotions, and Jason and I had to get in touch with our own feelings and look back on how we've figured out how to have these conversations as a parent and a child,” Brown says.

No matter what Brown does, the common denominator is that he’s there to help others. The three-time Emmy winner and former social services worker has written books for both adults and children that contain inspiring messages of resilience and optimism, including his memoir, Karamo: My Story of Embracing Purpose, Healing, and Hope.

With I Am Okay to Feel, Brown has big goals. While the picture book is obviously written for little ones, Brown knows that the people who read his books out loud also have something important to gain from his words. “I hope our picture book is the beginning of a conversation between adults and children,” he says. And like so many of his other projects, Brown’s book is a tool for transformation. “I wanted to create a picture book that was empowering and practical, which is why we worked with psychologists to develop the tools and activities featured in the book.” And that’s definitely one of the bonus strengths of Brown’s book. The back matter of I’m Okay to Feel is chock-full of expert-vetted resources developed with psychologists Drs. Farzana Saleem and Aubrey Harrison and designed to build emotional intelligence.

Next, Brown has his eyes set on revamping the talk show landscape with the The Karamo Show, set to premiere in September 2022. Whether it’s his gold nuggets of advice on television or the powerful words tucked into the pages of his latest children’s book, we’ve all got a lot to learn from Karamo Brown.

I Am Okay to Feel, from Zando Young Readers and illustrated by Diobelle Cerna, will be released on Nov. 8, 2022.

More Like This
These Children’s Books About Juneteenth Are A Must For Families
Ciara’s Kids Make The Sweetest Cameo In Her New Song “Treat”
This Book Shows Kids How to Navigate Social Situations With Humor & Grace
From One Black Father To Another, This Is What Our Sons Really Need From Us