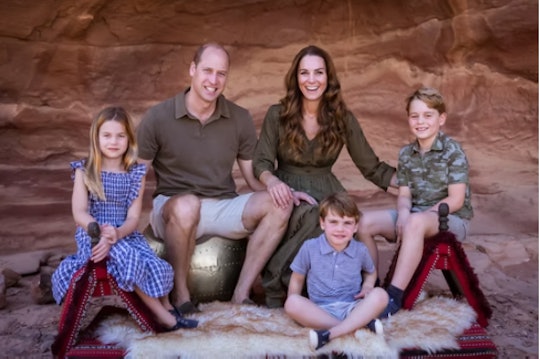 Fun fact: Kate Middleton lived in Jordan with her family when she was 2 years old.

When the Duke and Duchess of Cambridge released their official 2021 Christmas card photo last week, they were seen posing with their three children when they had taken a holiday to Jordan earlier in the year. The photo was lovely, of course, with the entire family looking relaxed and at ease in their summer outfits. But there was actually a fairly significant meaning behind the location of Kate Middleton’s Christmas card this year. And it had everything to do with her own childhood.

Long before Kate Middleton married Prince William and became the future Queen Consort of England, she was a little girl living abroad with her parents, Carole and Michael Middleton and sister Pippa. Living in Jordan, to be precise. From 1984 to 1987, Michael Middleton was working for British Airways and his family joined him for his work in Amman, Jordan, according to The Independent, and Kate went to an English-speaking nursery school at the time before returning to the United Kingdom to set up house in the Berkshires in 1987. Back in 2018, the Duchess of Cambridge was pregnant with Prince Louis when Prince William visited Jordan for a royal engagement, and he admitted at the time that his wife “loved it here, she really did. She is very upset that I am coming here without her.”

Kate Middleton once lived in Jordan.

When Prince William returned to Jordan with his family and took that precious photo, it was actually a promise fulfilled. During his first visit to Jordan in 2018, he recreated a photo from when his wife was a little girl, taken with her dad and sister sitting at the archaeological site of the ancient Roman city of Jerash. After the photo was taken he said, according to The Daily Express, “Need to come back with the family for this shot." Speaking to reporters later, he added, “We will have to bring the kids next time.”

How lovely for Kate Middleton to be able to share a part of her own history with her children. A piece of history before she became one of the most famous women in the world.