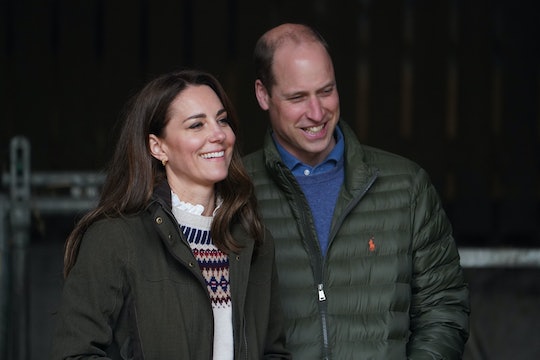 Jewelry worn by the royal family tends to get a lot of mileage. Tiaras, earrings, necklaces all get passed around and loaned and worn again and again because, let’s face it, they are worth an absolute fortune. So when a new piece shows up out of nowhere, it’s noteworthy. Especially when it’s, oh let’s say, a very sparkly necklace Kate Middleton is wearing in her 10th wedding anniversary photos. You know, the type of necklace that a loving husband might give to his wife to celebrate a decade of wedded bliss. How romantic.

The Duke and Duchess of Cambridge celebrated their 10 year anniversary on April 29 with two new photos together shared by Kensington Palace. It’s rare to see just the two of them posing for such a loved up and intimate photo these days, simply because they are parents of three children and are generally posing for pictures together as a family. But on their anniversary, they took time to celebrate themselves as a couple, the people they were before 7-year-old Prince George, 5-year-old Princess Charlotte, and 3-year-old Prince Louis arrived.

Middleton and Prince William looked relaxed and happy in their photos, with him wearing a blue sweater and her in a blue dress and a gorgeous, previously unseen, diamond necklace, which could very well be an anniversary gift from Prince William, as many in the media have pointed out. Diamonds are, after all, the traditional gift to celebrate the 10 year mark and meant to symbolize love’s endurance.

The $12,000 necklace is the Asprey Daisy Heritage Pendant, according to The Sun, and Middleton has not been seen wearing it in public before. Several news outlets have surmised that this necklace is likely a gift from her husband for their anniversary. Probably a safe bet judging by the size of her smile in these photos alone.

Prince William has reportedly gifted his wife with some stunning jewelry to celebrate big life events before. When Middleton welcomed their third child, Prince Louis, in April 2018, her husband reportedly gave her a citrine ring as a “push present.” The very next month she wore her new ring to Prince Harry and Meghan Markle’s wedding, per The Daily Express.

Middleton’s sapphire engagement ring was also on full display in the photo, another gift not just from Prince William but also her brother-in-law Prince Harry. He inherited their mother Princess Diana’s engagement ring and gave it to his brother when he decided to propose to Middleton.

He’s a romantic at heart, that Prince William, even after 10 years.