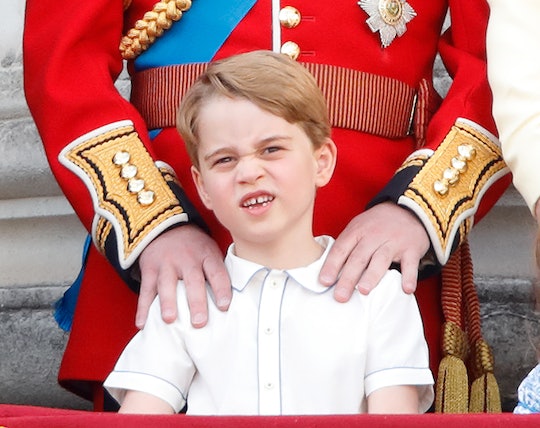 It’s based on an inside joke.

A future king he may be, but his parents are certainly keeping him from getting big-headed about the whole business. Kate Middleton and Prince William have a hilarious nickname for their oldest son Prince George, and it’s based on an inside joke between the two of them. And no, it’s not “Your Highness.”

The Duke and Duchess of Cambridge are very hands-on parents to their three kids, 8-year-old Prince George, 6-year-old Princess Charlotte, and 3-year-old Prince Louis, and tend to focus on keeping their lives as normal as possible. The kids fight over songs to dance to in the morning, get dropped off at school by their parents, all the regular stuff. They also get fun nicknames, for example. The couple reportedly have a nickname for Prince George that requires a bit of a deep dive, and I’m here for it.

According to My London, Middleton and Prince William call their son “Tips.” Why, you ask? Because Prince George is shortened to PG, and PG Tips is a kind of tea. So these parents are calling the future King of England Tips, because of a brand of tea that’s not even super expensive or anything, like it’s no big deal.

Prince George isn’t the only royal who gets a funky nickname. Prince William was heard calling his daughter Princess Charlotte “Mignonette,” which is French for “cute and little,” during a 2019 visit to the Chelsea Flower Show. It bears noting that she was heard exclaiming “Ooh la la!” that same day, so that just makes the nickname even better. Middleton called her daughter “Lottie,” a short version of Charlotte, during a visit to Northern Ireland in 2019 as well.

As for Prince Louis, not much is yet known about his nickname. Louis already sort of sounds like a nickname so I can see why they might not be in a mad dash to find a good one. Middleton called him “my little Louis” during a visit to a Christmas tree farm in 2019, so that’s pretty cute.

“Tips” should feel honored to have his special nickname. It could be worse. After all, his dad used to call his grandmother Queen Elizabeth “Gary.”