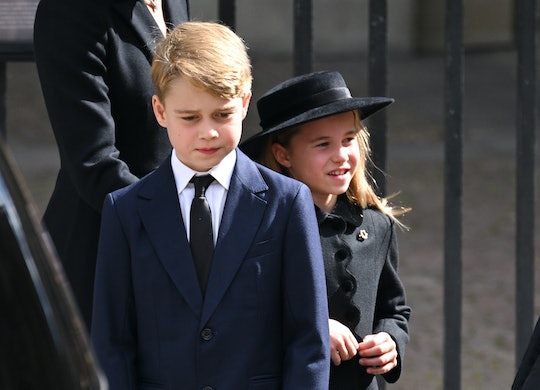 Prince George, Princess Charlotte, and Prince Louis were apparently quite “beady-eyed” and curious about the security drones flying all over the grounds.

The first few weeks of September have been a lot to process for the entire royal family, but perhaps especially for 9-year-old Prince George, 7-year-old Princess Charlotte, and 4-year-old Prince Louis. They started at a new school together, Lambrook School, a few weeks ago and, not long after classes began on their first day, lost their great-grandmother Queen Elizabeth. Which naturally brought a whole host of changes along with it. So when Kate Middleton told royal fans that her kids had all been quite curious about the funeral preparations for the late sovereign, it was totally understandable.

The Prince and Princess of Wales greeted staff members who worked on Queen Elizabeth’s committal service at Windsor Guildhall on Thursday to thank them in person. Prince William spoke to staff members about the many levels of preparations that he and his family had watched get underway, and Middleton noted that she and her children had been watching the progress during the daily school run.

“When we’ve been doing the school run, we’ve been able to see the preparations going up. We’ve seen it growing,” she said, according to Hello!, going on to praise the team for the highly organized affair. “It must have been quite a mission. Having gone backwards and forwards last week, we could see it slowly growing. It seemed so well organised.”

As far as her three children were concerned, they all were apparently quite “beady-eyed” and curious about the security drones flying all over the grounds and reportedly asked their parents about them. In other words, they were normal kids getting excited about all the goings-on in the area.

The couple decided to keep their children going to school during the funeral preparations in an effort to help them keep a sense of “normal” life moving on, Vanity Fair reported. A local school teacher who met the Prince of Wales during his visit with well-wishers told Hello! that “Prince William spoke about George, Charlotte and Louis, saying that they were trying to keep some sense of continuity for them at school and keep things as normal as possible.”

It was already a difficult week for the children, with sensitive little Prince Louis comforting his mother in her grief over Queen Elizabeth while his older siblings attended their first-ever funeral with their parents. A little curiosity over such a massive affair is natural. And it’s sort of comforting to know the royal children were given the space to ask questions.