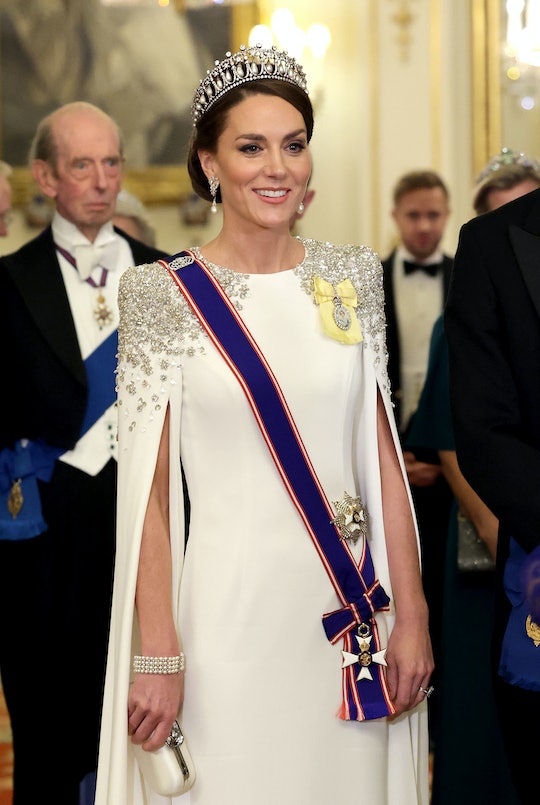 If the tiara fits...

It’s probably safe to say that Kate Middleton is a fairly casual Princess of Wales. At royal outings, the mom of three is more often than not seen in simple dresses or pants or sometimes even jeans and hiking boots. But when she needs to turn up the glamour, she knows exactly how to do it. By channeling her late mother-in-law and former Princess of Wales. Indeed, Middleton wore Princess Diana’s own tiara to the first-ever state banquet hosted by King Charles III at Buckingham Palace.

Middleton joined her husband Prince William at a Buckingham Palace state banquet in honor of South African President Cyril Ramaphosa’s visit to the United Kingdom on Tuesday. She arrived wearing a white dress by one of her favorite British designers, Jenny Packham, a royal purple sash, and a stunning tiara once owned by Princess Diana called the Lover’s Knot.

The special tiara, which Middleton has worn several times in the past for formal royal functions, is adorned with 38 teardrop-shaped pearls suspended underneath arches. The tiara, which is sometimes referred to as the Cambridge Lover’s Knot as it was modeled after one owned by Queen Mary's grandmother, Princess Augusta of Hesse, the Duchess of Cambridge, was made using Queen Mary’s own pearls and diamonds in 1914. The tiara was then passed down to Queen Elizabeth after her grandmother Queen Mary died in 1953, and in 1981 Her Majesty loaned the tiara to Princess Diana for her wedding day. While Princess Diana chose to wear the Spencer tiara from her own family instead for her royal wedding to Prince Charles, she eventually wore the Lover’s Knot tiara on many occasions. So much so that many considered it her go-to tiara.

Middleton has often honored her late mother-in-law with her fashion choices at royal functions. Whether she is wearing Princess Diana’s earrings to Queen Elizabeth’s Platinum Jubilee as she did last June or even just popping her collar under a sweater as Princess Diana was wont to do, Middleton is keeping her memory alive in ways both subtle and more overt.

Between her fashion choices, her natural ease with children, or the fact that she is beloved by the British people, Middleton really is the natural heiress to the title of Princess Diana. She wears it well.