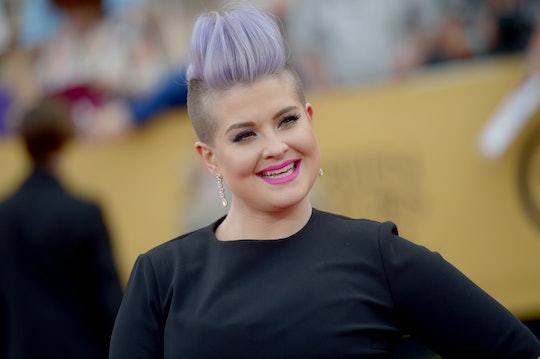 “To say that I am happy does not quite cut it. I am ecstatic!”

Kelly Osbourne is going to be a “Mumma.” In an excited Instagram post featuring a sonogram photo, the former View panelist announced that she is pregnant and expecting her first child with her boyfriend DJ Sid Wilson, the turntablist for the heavy metal band Slipknot.

“I know that I have been very quiet these past few months so I thought I would share with you all as to why… I am over the moon to announce that I am going to be a Mumma,” Osbourne announced on Instagram. “To say that I am happy does not quite cut it. I am ecstatic!”

The 37-year-old mom-to-be shared two pictures of her sonogram, including one of her gazing at her future child by the pool.

Osbourne and Wilson publicly confirmed their relationship back in February when Osbourne posted a photo of the two of them on Instagram on Valentine's Day. “After 23 years of friendship, I can’t believe where we have ended up! You are my best friend, my soulmate and I am so deeply in love with you Sidney George Wilson,” she captioned the Feb. 14 post.

Wilson, 45, also shared a sonogram picture on his Instagram with red hearts and family emojis.

Osbourne’s family also took to Instagram to share their excitement about their expanding family. Kelly’s mother, Sharon Osbourne, wrote, “My ❤️ could not be more full! So excited to share the beautiful journey ahead with you @kellyosbourne.” The Osbourne matriarch is affectionately known as Shazza to her grandchildren.

Kelly’s brother, Jack Osbourne, who has three daughters, also congratulated his sister. “And the tribe gets bigger,” the 36-year-old posted on Instagram.

The “Papa Don’t Preach” star previously struggled with drug and alcohol addiction and revealed she had a relapse in April 2021. In a June 2021 interview on Red Table Talk, Osbourne spoke candidly about how she felt that time was wasted while battling her addiction. “I feel very behind. As a woman I would have loved to be married and have children by now,” the Fashion Police alum said on Red Table Talk. “My brother has three daughters, and I would have loved to have a few kids by now, but that wasn’t what was in the cards for me yet.”

In October 2021, Osbourne celebrated five months of sobriety. “Today marks my 37th birthday and I’m 5 months sober!!!” she captioned a photo of herself. “I am filled with so much gratitude it’s almost overwhelming!”

The past few months have surely been full of happy moments for Osbourne and many more are on their way.

More Like This
Sarah Levy Revealed She's Pregnant & Got A Very Schitt's Creek Response From Brother Dan
Katrina Scott On Being First Pregnant Model In Sports Illustrated’s Swimsuit Issue
Michelle Williams Is Going To Be A Mom Of 3!
Serena Williams Shows Us How This New Justin Bieber Song Is Basically A Mom Anthem