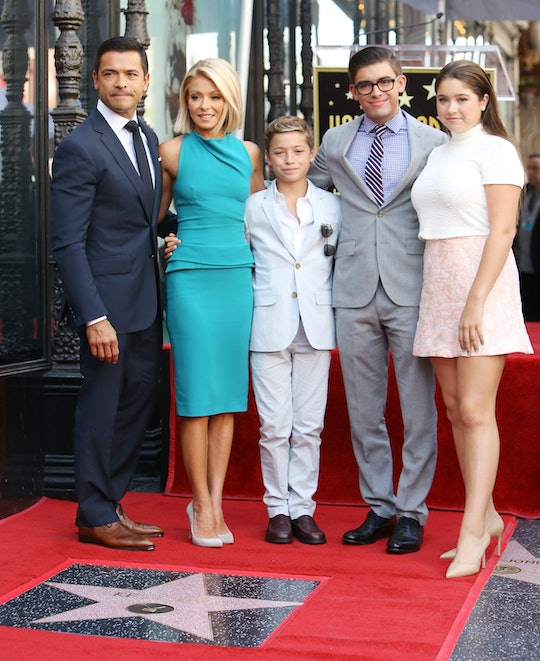 Kelly Ripa is stirring up trouble on Live! With Kelly And Ryan. The mom of three broke a cardinal rule of parenting when she admitted that she secretly has a favorite child, but she doesn’t believe anyone in the family knows who it is.

Ripa was co-hosting her morning talk show with husband Mark Consuelos, who was filling in for Ryan Seacrest, when she broke the news that she does, in fact, have a favorite child. Also a favorite dog which is nearly as scandalous to admit.

“I have a favorite child and I have a favorite dog but they don't know who they are,” she told her husband, per People. “As a matter of fact, each one of my kids accuses the other child of being my favorite. Constantly. They're like, 'Well, you're mom's favorite.' 'No you are.' 'No, you are!' And that's the best game to play, isn't it? You never know who is going to benefit at the reading of the will."

Could It Be Michael?

Could Kelly Ripa’s son Michael be her favorite?

Moms tend to have a soft spot for their first born child. I tell you this as a first born child. So it would not be terribly surprising to learn that Ripa’s oldest son Michael is her favorite. During quarantine, he did work with her to help produce her morning show from home, after all. But he apparently wasn’t a fan of that extra time with mom, Ripa told Seacrest at the time per E! News, “Breaking news. Michael Consuelos wanted me to tell you, Ryan, that he is most certainly not enjoying his time in quarantine.” Maybe he’s not the favorite. Or maybe he’s keeping her on her toes and making her work for his love?

Lola’s sass could make her the favorite.

As Ripa’s only daughter, Lola could potentially have a leg up in the favorite department. Plus, she and her mom have excellent social media banter, like when Ripa posted “thirst trap” photos of her husband on Instagram and Lola commented “disgusting.” Or when Lola was a guest on Live! With Kelly And Ryan and outed her mom for telling stories about her that she says aren’t true. Sometimes it’s the person who calls you out that you love the most.

According to Lola, there’s no question that Ripa’s youngest son Joaquin is her favorite. In a 2017 cooking segment on Live! With Kelly And Ryan, Seacrest asked Lola who was her mom’s favorite and she immediately answered “Joaquin. For sure.” She went on to explain why he is his mom’s favorite, “Joaquin is cute, he loves to do so much physical activity, like every day. He’s a hard worker, and he’s just so nice.”

Ripa’s response at the time? “I don’t have favorites, I only have least favorites.” Her daughter noted that “Michael would agree,” and then Ripa basically confirmed it. “Joaquin is the nicest to us.” So is it such a “secret” after all?