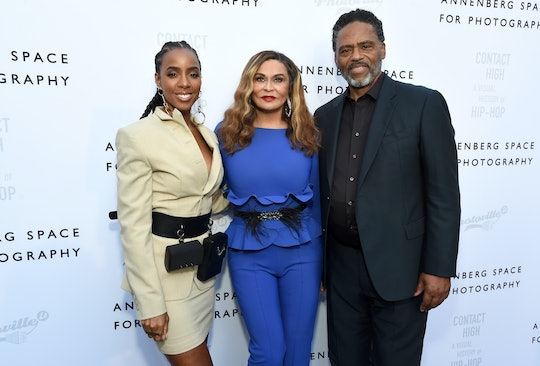 When it comes to motherly advice, Tina Knowles does not hold back with Kelly Rowland. During an appearance on The Jennifer Hudson Show, the mother of two shared the advice she received from Beyoncé’s mother, or Mama T as she calls her, after she took her 7-year-old son Titan to see her new Halloween film, The Curse of Bridge Hollow and he got a little spooked.

On Monday’s episode of The Jennifer Hudson Show, Rowland recalled what she called a “bad parenting moment” with her son when they were watching The Curse of Bridge Hollow, a comedy horror starring her and Marlon Wayans that’s available now on Netflix. What made the movie especially scary for Titan is when Rowland’s character looks like she is dying.

“I thought since I'm sitting right there with them we're fine,” she said on the talk show. “But there's a scene in a movie where mommy looks like she's about to go to the other side and basically Titan goes ‘Mommy!’ Like it was a whole release.”

Rowland went on to share how she called Knowles, who gave her an unapologetic “mom” response. “She's like ‘Well why the hell you do something like that?’ She didn't understand why I even shot a movie,” she said. “She's like it's Halloween baby you don't do that no more.”

In other words, don’t scare your kids by thinking something happened to you, even if it is fake. The possible reality of it could be frightening enough. Just listen to Mama T.

Rowland is a mom of two boys; Titan and nearly 2-year-old Noah, with her husband, Tim Weatherspoon. She’s known Knowles since she was a child. She and Beyoncé practically grew up together and has often referred to Mama T as a mother figure, and the love goes both ways. “Kelly is my daughter,” Knowles spoke with Entertainment Tonight about their relationship in an October 2021 interview. “She's been living with me since she was like 11 so she's actually a sister to my girls and a daughter to me.”

Rowland’s real mother passed away in 2014 from a heart attack. The Destiny’s Child star touched on how she feels her mother’s presence when raising her two boys. On Monday’s episode of The Jennifer Hudson Show, Rowland recalled one such strange experience she had with her son Noah. “There was a night Noah was asleep, we were asleep and all of a sudden like something just like woke me up and I was like what is that!” Rowland shared with Hudson. “And I swear, I swear to you, you're gonna think I'm crazy when I say this but it was like ‘wake up go get my baby.’ And so I go to his room it is freezing cold in his room. [My late mother] was probably saying get your butt in there and cut that air down because my child is freezing ... I can still feel her presence all the time.”

Needless to say, Rowland has both an earthly and heavenly mother looking after her and her kids.