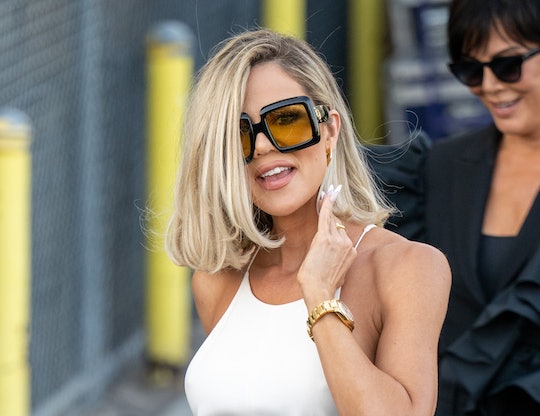 The mom of two also shared a secret about her real feelings about the holiday...

Treats for all Kardashian fans this spooky season courtesy of Khloé Kardashian! The Good American founder revealed a new glimpse of her newborn son, and he’s sweeter than candy. The baby boy, who was born on Aug. 5 via surrogate, and his older sister True, 4, are all dressed up for Halloween in the precious Instagram photos posted yesterday.

“Owlette and Tigger aka True and Baby Brother,” Kardashian captioned the post, referring to the totally adorable Halloween costumes the siblings, who Kardashian shares with ex-boyfriend Tristan Thompson, are wearing. True is wearing a red Owelette costume from PJ Masks, complete with matching red elastics in her hair, and she’s holding the baby, who is dressed head-to-toe in a Tigger from Winnie The Pooh costume that looks incredibly squishable.

In the photo, True is grinning at the camera, but the baby’s head is turned so you can only see the back of his orange-and-brown striped hood. The next picture is a closeup of his little brown Nike shoes.

She also offered a relatable secret at the end: “(Shhhhh…. But I can’t wait for Halloween to be over).” This may be an unpopular opinion, but yes, girl! Halloween is a lot, with the costumes and the face paint and the candy and the trick-or-treating and the endless parties — doesn’t it sound nice to just cuddle up with a Hallmark movie and a large glass of wine on Nov. 1 to celebrate the beginning of the holiday season instead? Yes, yes it does.

Fans were feeling a little annoyed with not seeing baby boy’s face. One person wrote, “Why are you guys hiding your second child? Lol.”

Others were just so excited to see his costume. “Omg how cute , I thought that was a stuffed animal she was holding, I can't wait to see him,” another said.

Kardashian has offered sneak peeks of her son before, including on an episode of The Kardashians Season 2, when they first met the baby. In it, she holds her son in the hospital bed, showing viewers his dark curly hair. During this same episode, True saw the baby on FaceTime and said, “Hi, Snowy!” This, of course, led to wild rumors that the baby was named Snowy (or that Kylie Jenner’s son bears the chilly moniker).

Last week, Kardashian cleared up the rumors on an episode of The Kelly Clarkson Show.

"You haven't revealed your son's name yet. Is it a family name? A hint?” Clarkson asked in the episode.

“Well, my daughter says his name is Snowy,” Kardashian responded. “It's not Snowy. So that's the hint.”

“I was like, 'Are you a big Game of Thrones fan?' Jon Snow,” Clarkson added.

“I swear she just does things to sort of like mess with me,” Kardashian continued, then reiterated one more time: “But his name is not Snowy.”

The Kardashians star also revealed that she is “good” with two kids as she has a daughter and a son. “One of both [now]. I think I’m good,” she said about having any more kids. “Shop is closed.”

Maybe she’ll give fans another clue to her baby’s name on Thanksgiving or Christmas. You never know!