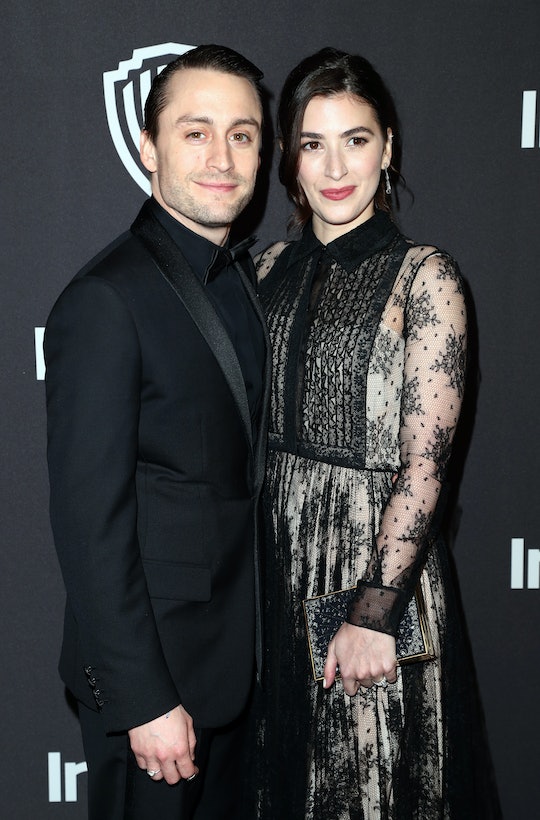 The Succession star and his wife couldn’t settle on his name for seven weeks.

Actor Kieran Culkin comes from a large show business family, and has a growing young family of his own. The 39-year-old actor, who plays Kendall Roy on the hit HBO show Succession, is one of seven siblings, and has occasionally acted alongside his older brother, actor Macaulay Culkin. The star and wife, Jazz Charton, have started a family of their own now, and while it might not be as cut throat as the one in Succession, Kieran sounds like such a proud papa when he does talk about his two kids.

He Has Been Married To Jazz Charton Since 2013

Culkin reportedly met Charton, who was working at an ad agency at the time, at a bar in New York in 2012. He told Britain’s iNews in 2018 that she was at the bar with another man, so he waited for him to go to the bathroom and took his seat. “I asked if he was her boyfriend, and when she said no, I asked if I could be her boyfriend,” he recalled. “We’ve been together ever since.”

While on a road trip across the United States, the couple got married in 2013, according to Telegraph; their only witness was an 18-year-old named Kinsey whom they had met at a local café (make note — this name comes into play again later). “We packed the car with rings, her wedding dress, and my suit, and just drove across the country for three months, thinking we’ll get married somewhere,” Culkin recalled.

Charton’s Instagram feed shows that she’s a loving mom. Her account is filled with photos of their two little ones playing together, hanging out with their dad, and simply embracing life in New York City.

Their Daughter, Kinsey, Is 2

Culkin and Charton welcomed their first child, a daughter named Kinsey Sioux, or “Zissou” as they call her, into the world on Sept. 13, 2018. Culkin told Telegraph earlier this month that they ended up naming their daughter after the witness at their wedding. At the time, the couple thought: “Wow, this 18-year-old has got her s— together way more than the two of us,” he recalled. “Then a couple of days later we were talking about her and I said, ‘We should name our daughter after her.’” Four years later, the couple fulfilled their promise.

Although Charton does not show Kinsey’s face on Instagram, you can tell from photos that she is a happy little girl and a loving big sister.

Kinsey is Culkin’s mother’s first grandchild, he told Ellen DeGeneres in 2019, which was a very exciting thing for her.

They Named Their Son 7 Weeks After He Was Born

Charton and Culkin welcomed their second child, a son, in August. And in a recent interview with Ellen DeGeneres, Culkin revealed they named little boy Wilder Wolf after several weeks of back and forth. “We found [the name] in the hospital the day that he was born and we thought, 'That's great, but instead of pulling the trigger on it, let's torture ourselves for about seven weeks disagreeing with names before we come around to the name that we picked,’” he told DeGeneres.

Until then, they used the placeholder name “Tito,” for him, according to The Hollywood Reporter, and photos from Charton’s Instagram feed show that he’s been acclimating into the family quite nicely.

Just like the name of their 2-month-old son, the couple kept Charton’s pregnancy under wraps, waiting until May to subtly announce the news of their second pregnancy.

In spite of having two kids under the age of two, Culkin isn’t keen on giving out advice. “The best advice that someone gave me when I became a new parent was don’t take any advice, you’ll figure it out,” he told Access at the Season 3 premiere of Succession.

Culkin’s own little successors are too sweet. But don’t expect them to be impressed with their dad’s success or try to fight to inherit the family business, like Culkin does on Succession, any time soon. “I was walking down the street with my 2-year-old daughter the other day and I went out in the morning and saw, ‘Oh, they put the Succession poster on our corner,” he told Entertainment Tonight on Thursday. “And she’s pushing her little mini stroller and I go ‘[Kinsey], who’s that? Who’s that?’ and she goes ‘Dada’ and keeps pushing. She doesn’t give a sh—.”

This article was originally published on Oct. 19, 2021