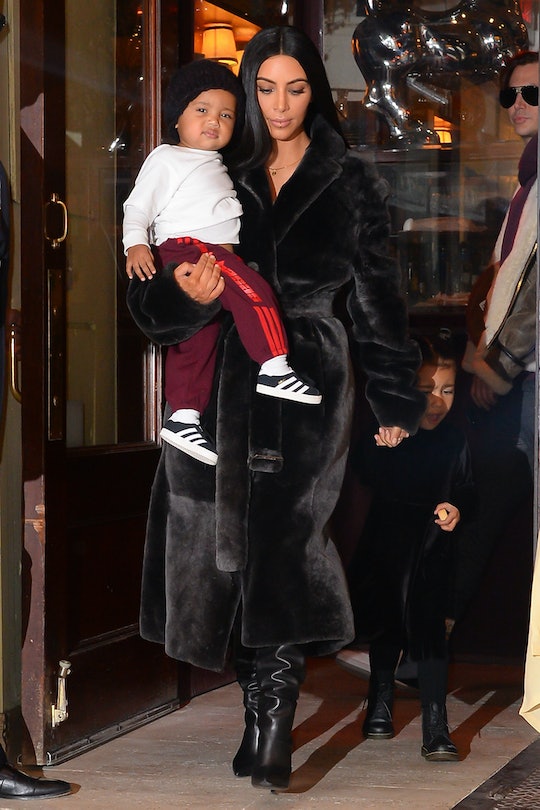 Kim Kardashian Is Sure Saint Is Her “Twin”

Almost no one agrees.

Do you ever get into those arguments with someone where they think your kid looks like one person and you think they’ve got it totally wrong? So does Kim Kardashian, except in her case almost no one on Twitter agrees with her. As it turns out, Kardashian thinks her 5-year-old son Saint is her “twin,” though her fans think differently.

The Skims mogul responded to a comment from one of her followers on Twitter on Monday who noted, “Saint looks like a light skin Kanye. Like seriously twins!!!!!” Saint’s mom begged to differ. While Kardashian is mom to 8-year-old daughter North, 3-year-old daughter Chicago, and 2-year-old son Psalm along with Saint, she appears to feel certain he is the one who looks the most like her. No matter what anyone might say.

“Really? People say this all the time! Why do I think he’s my twin????,” she responded.

Perhaps Kardashian thinks her son is her twin because he is so like her in temperament. She told People in 2019, “Saint, I think, has more of my personality.” Or perhaps she really does just think he looks like her. If so, she’s got some fans who beg to differ.

One fan wrote in response, “girl no he looks like kanye,” but the social media user did add that Chicago was another matter. “but chi! now that’s your twin!”

Kardashian responded, “What’s crazy is I don’t really see that but everyone says it!” A lot of users seemed to really think that Saint looks like his dad, Kardashian’s ex-husband Kanye West, “Saint is such a mini Kanye, imo.”

Another user thought three of the kids looked like Kardashian’s late father Robert, “Nah Saint & Chi & Psalm. They all have your daddy, Robert Kardashian all in them. Maybe that's just me but that's what I see.”

While everyone was weighing in and deciding, one social media user put it perfectly. “What matters is what you think and believe don't let anyone try and change or make you second guess your opinion.”

The fact is that Kim Kardashian sees more of Saint than we do, that she knows him better, and that she’s allowed to think he looks just like her. Kids’ faces change all the time, as we all know. One day your kid looks like you, the next they are someone else entirely. Let her enjoy it while it lasts.