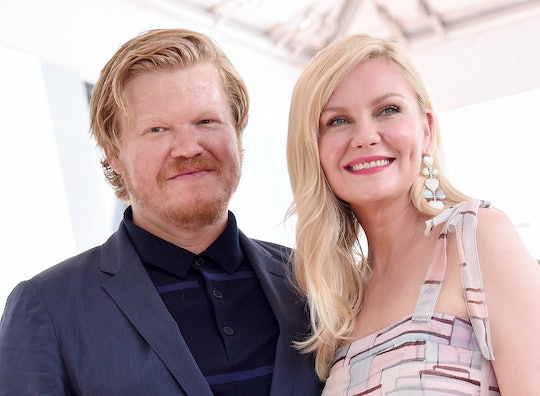 Kirsten Dunst’s Sweet Little Family Is Growing By One More

The Bring It On actress and her partner, Jesse Plemons, are expecting their second child!

Kirsten Dunst’s family is growing by one more! The actress announced that she’s pregnant with her second child in a stunning photoshoot earlier this week. And while she’s pretty private about her life off-screen, Kirsten Dunst has talked about her family and motherhood on a few occasions.

Dunst was just 11 years old when she got her big break after starring in Interview With A Vampire opposite Tom Cruise. But when it comes to her personal life, Dunst is pretty private. She and her partner, actor Jesse Plemons, rarely talk about their relationship, and you won’t find personal photos of them on her Instagram account. But when Dunst does talk about her relationship and her family, you can tell that it means everything to her.

In a new photoshoot for W Magazine, published on March 30, Dunst confirmed that she is expecting her second child. The actress appeared in a series of photos for the magazine, directed by Sofia Coppola, with a noticeable bump on display.

The actress posed while laying down in several shots, which was apparently very difficult for her, as she told to W Magazine. “Every shot was on the floor,” she joked to the magazine. “I was like, ‘I can’t get up.’ I felt like Urkel.”

Dunst did not share how far along she is in her pregnancy or the sex of the baby, but hopefully there are more updates to come.

Her Son Ennis Is Adorable

Dunst and Plemons welcomed their first child, a son named Ennis, in May 2018. In a 2019 interview on Jimmy Kimmel Live!, Dunst said that they picked out his name after finding it on a baby name website, and it stuck.

While the couple has maintained a sense of privacy for their son, who’s now 2, he did make a public appearance when Dunst received her star on the Hollywood Walk of Fame in August 2019.

Although Ennis has been photographed, don’t expect Dunst to post photos of him on Instagram. “I come from an old school mentality where you don’t want to give too much away, because it kind of ruins the mystique of people playing roles,” she said during an interview with BUILD Series in August 2019. “And also, do you really want to see a photo of my kid? I don’t know. What if my kid grows up and they’re like, ‘I hate you mom. Why’d you put me all over Instagram?’ Kids find any reason to hate their parents. Let’s just avoid all of the things you can.”

Dunst has been open about the hardships of being a working mother, telling reporters at the Television Critics Association Summer 2019 Press Tour that she was always “tired all the time” and that it’s “easier to go back to work” than be a stay-at-home mom, according to People.

And just because Dunst and Plemons grew up in the industry doesn’t mean that they’ll push 2-year-old Ennis to be a child actor, even if he is really cute. “He is such a happy baby and I see why I might want a memento of him at this age,” she told Net-a-Porter Magazine in 2019. “But we will probably encourage him to do school plays.”

Kirsten Dunst & Jesse Plemons Have Been Together For Years

The two actors met for the first time when they were cast as a couple on Season 2 of the FX series Fargo in 2015, but they didn’t start dating until a year and a half later in 2016, according to Us Weekly. “I knew that she would be in my life for a long time,” Plemons said of Dunst in an interview with The New York Times in 2020.

“We laugh about the fact that we were two child actors and we both made it out OK,” Dunst added in that same interview.

The couple got engaged in 2017, but since they are so private about their relationship, it’s not clear if they ever tied the knot or are still enjoying engagement bliss. Dunst was still referring to Plemons as her fiancé in 2019, and they have not publicly shared if they’re husband and wife, according to the Hollywood Reporter.

No matter what their title is, the couple is so clearly in love. “Seeing the kind of mother, wife, daughter, sister, friend and cohort you are is why I and all your friends and everyone else are here today and why we all love you,” Plemons said at Dunst’s Hollywood Walk Of Fame ceremony. “It’s for the incredibly generous and amazing person that you are.”