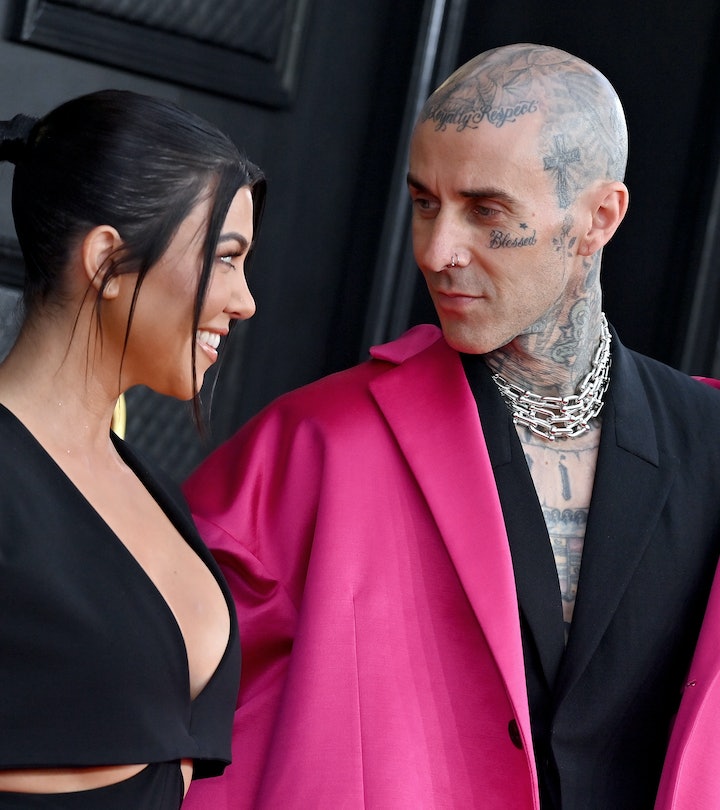 If you need help with Keeping Up with the Kardashian-Barkers, here’s everything you need to know.

Keeping Up With the Kardashians star Kourtney Kardashian and Blink-182 drummer Travis Barker have tied the knot! Months after Barker got down on one knee at a beach in California and popped the question, the couple got married in Las Vegas.

Kravis, as fans like to call the couple, had a secret wedding ceremony over the weekend, TMZ was first to report. After more than a year of dating and a fairly spectacular engagement, the couple headed off to Las Vegas to tie the knot since they were already in town for the Grammys. Now that it’s officially official, Kardashian and Barker’s blended family will be big, and so filled with love.

Kardashian and Barker were in Las Vegas over the weekend to attend the Grammys, and decided to make things official while they were in town with basically one must-have; Elvis needed to be the one to marry them.

On Wednesday, Kardashian shared some photos of the event on Instagram, several days after they said “I do,” along with the caption, “Found these in my camera roll. Once upon a time in a land far, far away (Las Vegas) at 2am, after an epic night and a little tequila, a queen and her handsome king ventured out to the only open chapel with an Elvis and got married (with no license). Practice makes perfect.”

This is first time that Kardashian said “I do,” while Barker has been married two previous times. While it sounds like this wedding was a spur of the moment kind of thing, they’re expected to have other ceremonies. Presumably ones that would include their newly blended family. Here’s a little reminder of all the members of the Kardashian-Barkers.

Kourtney Kardashian has three children with her ex, Scott Disick.

Kardashian and Disick have welcomed three children together. From rough break-ups to exciting family moments, like giving birth on TV, most of their relationship was documented throughout the course of the 14 years that Keeping Up With the Kardashians was on air. Cameras also captured how much Kardashian loves her role as a mom to her three kids.

Kardashian gave birth to her oldest child and first-born grandchild of Kris Jenner, Mason Dash Disick, in December 2009, pulling him out while KUWTK cameras documented her labor. Mason is your typical pre-teen. He enjoys being a big brother to his younger siblings and likes social media — even if that means starting secret accounts behind his mom’s back.

Her daughter Penelope is 9.

Kardashian welcomed her only daughter, Penelope Scotland Disick, in July 2012.

The little girl loves posing for photos on her mom’s Instagram feed, hanging out with her cousins, and has even started learning how to play the drums from her step-dad-to-be. “When she wants to learn then or learn something new I like being there to fill that little space, that creative space in her head,” Barker told Nylon in September.

Kardashian’s youngest child, 7-year-old son, Reign Aston Disick, was born in December 2012. The little boy loves dancing, “talking 24/7,” according to his mom, and has even tried his hand at learning how to surf.

Travis Barker has three kids with his ex-wife, Shanna Moakler.

Having a big family isn’t the only thing that Kardashian and her fiancé have in common. Barker was also the star of his own MTV reality show, Meet the Barkers, which first aired in 2005, documenting him raising his three kids with Shanna Moakler, his ex-wife and former Miss USA. Over the years, he’s often opened up about how much his kids mean to him.

Barker is the stepfather to 23-year-old Atiana De La Hoya. Atiana was just 5 years old when Barker married Moakler, her mom, in 2004, according to Hollywood Life, and has since remained super close to the drummer.

De La Hoya has shown her support for the couple’s relationship by frequently commenting on Kardashian’s Instagram photos and even going on vacation with the family.

Barker’s only son, Landon Asher Barker, was just an infant when he appeared on Meet The Barkers, and has since grown up in the public eye.

Landon is following in his dad’s footsteps because he is also a musician and a social media star with nearly 1 million followers on TikTok.

His daughter Alabama is 16.

Moakler and Barker welcomed their daughter, Alabama Luella Barker, into the world in December 2005.

While she might only be 16, Alabama is somewhat of a social media celebrity, with 1.5 million followers on TikTok and more than 700,000 followers on Instagram. But most of all, Alabama is really supportive of her dad’s relationship with Kardashian. “Love u guys,” Alabama commented in the caption of Kardashian’s engagement announcement.

This is about to be one big blended family, but it’s nothing that the couple can’t handle. “I love being a dad,” Barker told Nylon in September. “I always say that’s my best...it’s better than any song I’ve ever made or any accomplishment I’ve ever had or I’ve done.”

More Like This
Squid Game: The Challenge Reality Series Is Coming To Netflix
North West Flips The Bird During Family Photos
Prince George Hosted A “Little Cake Sale” For One Of His Dad's Favorite Charities
Kristen Bell Just Hinted That 'Frozen 3' Is Maybe (Hopefully!) In The Works

This article was originally published on Oct. 23, 2021