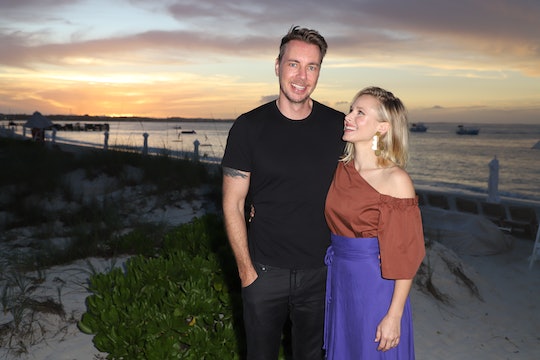 Even celeb parents can’t work from home without a few interruptions from their kids.

For parents who have spent the last 15 months or so working from home, the frustration of having a child interrupt a work meeting is perhaps an all too familiar feeling. And it turns out even celebrity parents aren’t immune. Kristen Bell and Dax Shepard’s daughter recently interrupted a virtual TV interview the couple was doing with TODAY, forcing them to momentarily pause the interview and walk off-screen.

In a clip of the interview shared Wednesday by TODAY, Bell clearly becomes distracted by something off camera while Shepard is answering a question from co-host Al Roker. “We have a child at the door,” Bell said as she touches her fingers to her forehead in exasperation.

It’s unclear which of Bell and Shepard’s two children meandered into the room. The couple are parents to both 8-year-old daughter Lincoln and 6-year-old daughter Delta and are careful not to ever publicly share their children’s faces. But whichever daughter it was, they apparently had no plans to leave before getting at least one of their parent's attention.

“Hold on,” Bell asked Roker as both she and Shepard stood up and walked off-screen to deal with their daughter. Roker, now the only person on camera, spends at least five or six seconds chuckling softly to himself before Bell pops her head in front of the camera.

“I [told her], ‘We’re on TV right now. We’re on the news,’” Bell explained to Roker. “And she said ‘OK,’” Bell continued, pouting and lowering her head to mimic her daughter’s apparent disappointment.

While Bell and Shepard ultimately asked their daughter to hold whatever she needed to tell them until after they were done with their interview, they told Roker they were fairly confident they knew what she wanted. "This, I'm sure, is about the doll's birthday," Bell said as she and Shepard returned to their chairs on screen. “We found out yesterday that it’s her doll’s birthday and now we have to order a cake. She’s taking it very seriously.”

Although Bell and Shepard have chosen to protect their children’s privacy by keeping their faces off social media and out of the public eye, they’re not above sharing some of the more hilarious moments in their parenting journey. In June, for example, Bell revealed Delta’s penchant for leaving strongly-worded notes around the house.

In one instance, Delta staked her claim to a cookie with a note that read, “Delta’s cookie. Don’t eat it or else.”

In another instance, the 6-year-old demanded privacy while on what Bell described as a 30-minute hunger strike with a note that read, “Don’t disturb, Delta is starving to death, only Mom can come in.”

Roker’s full interview with Bell and Shepard is expected to air Thursday on TODAY.

More Like This
Kristen Bell Just Hinted That 'Frozen 3' Is Maybe (Hopefully!) In The Works
Carole Middleton Looked Like Royalty In Daughter Kate's Pink Dress
Bradley Cooper Jokes He Watches 'The Hangover' With His Daughter "Every Friday Night"
Chris Pratt Says He "Cried" About That "Healthy Daughter" Instagram Post Controversy