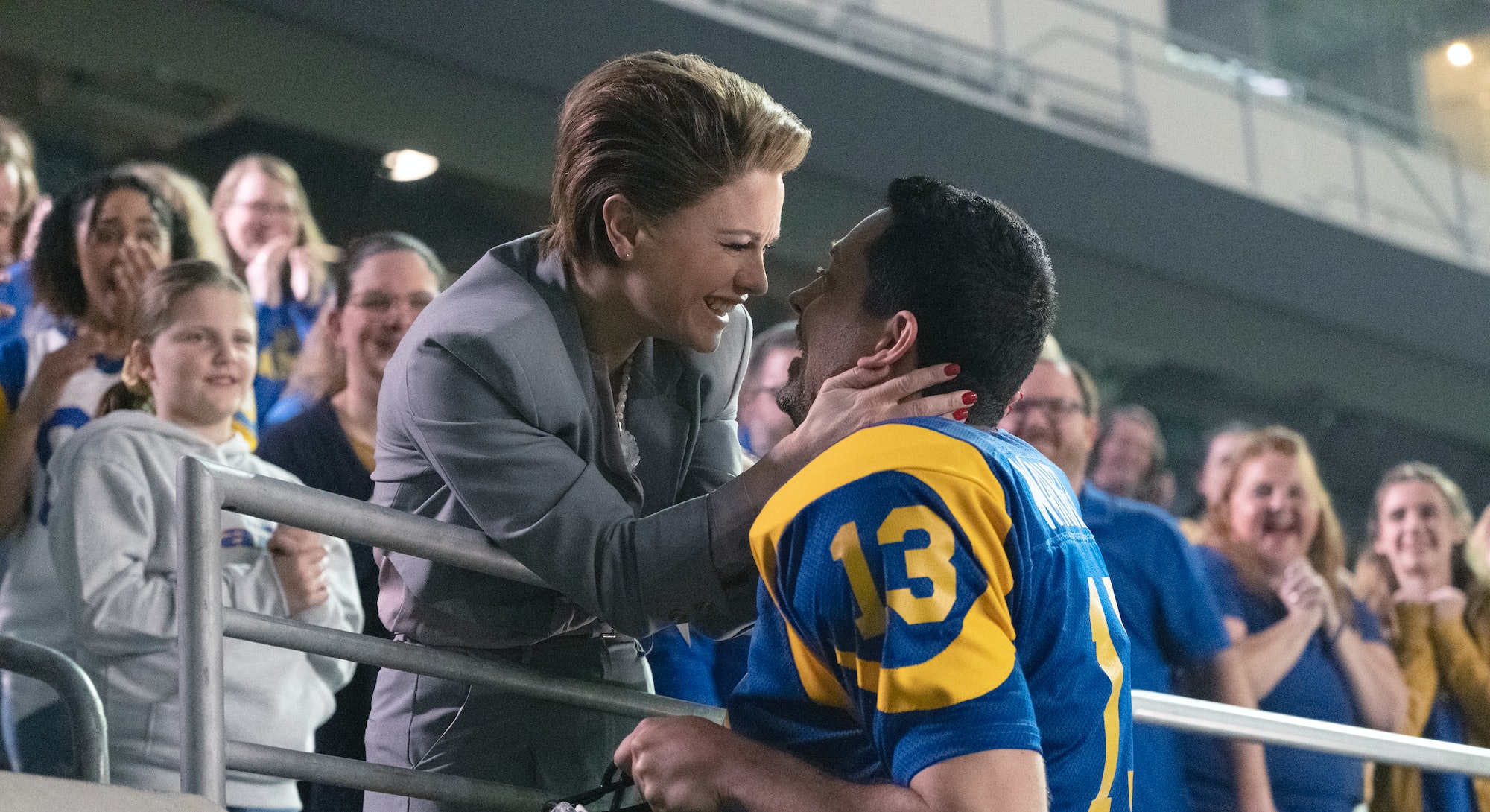 Kurt and Brenda Warner on their courtship and marriage, stepparenting, raising a disabled child, and what it’s like having a movie made about their life.

It would be tempting to dismiss American Underdog as another football movie, as it follows the story of former NFL quarterback Kurt Warner, who is roundly regarded as one of the greatest undrafted players of all time. And indeed, his ascent from working overnight shifts at the local supermarket to unlikely two-time league MVP is standard sports movie fare. But American Underdog pays as much attention to the character of Brenda Warner as it does her husband, and is as much a love letter to single mothers and stepparents (and their children) as it is a tale of athletic dreams and glory.

Kurt (played by Zachary Levi) meets Brenda (played by Anna Paquin), who is a divorced former Marine, when he is still in college at the University of Northern Iowa. Despite her initial skepticism of Kurt’s ability to be in a relationship not only with her but her two children, Jesse Jo and Zachary, who is disabled, Brenda eventually lets Kurt into her life. The film captures the way that starting the relationship, while hard, wasn’t the hardest part. The real challenge was going all in, whether in football or families, and having the faith to stay there.

We spoke with the Warners by phone about American Underdog, parenting, raising a disabled child, and why representation of families that aren’t often depicted on film was so important to them.

Jamie: Obviously you both live a more public life than most people, but putting your life story out in this way couldn’t have been an easy decision. What prompted you to say, “Let’s do this”?

Kurt Warner: It wasn’t a quick, rash decision. I think if we’d done this earlier on [in our lives], we probably would’ve pulled back more. Like, “OK, it’s already been crazy enough; we don’t need to share anymore.” But as we’ve grown through it and seen how our story has been able to impact people, we’ve embraced that a lot more and been very open with it, so we wanted [the movie] to be real. And we want to share some of that stuff that people probably don’t know, but that a lot of people have probably dealt with in some way, shape, or form.

Jamie: I was really heartened to see a family like mine on screen — my mom was also a single mom with two kids when she started dating my dad, and, like you, Kurt, he stepped right into that role. It was refreshing not to see another “wicked stepparent” or “stepparents and children butting heads” narrative. Was that something that you were cognizant of wanting to represent, or was it just a byproduct of trying to keep the movie authentic to your experience?

KW: No, I think it was very cognizant. I saw that firsthand, my mom not being able to have relationships that she probably deserved because the man wasn’t ready to be able to handle someone else’s kids. I believe watching my mom and knowing that was probably a big reason why Brenda and I are together. A lot of people look at that type of relationship in a certain way, but I understood that once I got together with Brenda, I was receiving three blessings. We wanted to show in the movie that, too often, we label something without ever getting a chance to really know or experience it. A lot of times you think [in a relationship with a single parent] that it’s the kids that keep the man away or that cause the issues. I wanted to show that it was actually our son, Zachary, that probably brought us together. That broke down barriers that Brenda had about dating a college kid that wants to play football and broke down my barriers in regards to, what does this mean, taking on someone else’s kids? He was the glue.

Jamie: I love that you put it that way. My husband also has a man who became his father after he was older, like me, and both of our moms have joked, “Oh, he fell in love with the kids. I was just there.”

KW: They were easier, Jamie!

BW: I told Kurt when I met him, “I’m not easy. You got a lot of things going on in my head and my heart that you’re going to have to process with me. So is this what you want?” But I hope every single parent that watches this movie thinks to themselves, “I’m going to wait for that person that falls in love with my kids the way I want them to fall in love with me.” I hope everybody just believes in that and knows that it’s possible that there is love out there. And wait for someone to look at you the way that Kurt looks at me. I tell you, it’s worth the wait.

Jamie: Obviously this is a movie about your lives, but life isn’t a narrative the way a movie has to be in order to be watchable. So there’s a lot they left out. Is there anything you really wish they could have kept in?

KW: That was the hardest thing. Even scenes that they shot that were really good, powerful scenes you say, “Oh, my gosh, how do they leave X out?” But to us it came down to the fact that we were trying to tell a particular story with a particular theme running through. Ultimately I believe they got that right. Even though there’s some hard calls — three characters rolled into one, a moment that was vital but just didn’t fit [the narrative arc], things that weren’t exactly what we said — at the end of the day, if you’re proud of the product and the movie and the message and the essence of what you do, you’re OK living with that sort of stuff.

Jamie: In the movie, when Kurt is playing arena football, it’s a struggle because he’s away and Brenda and the kids are back home and she’s flying solo. I can’t imagine working in the NFL was easier in that regard. How did you two cope with that?

BW: It’s never been easy, and there’s many people out there that are taking jobs that take them away from the family, but it’s how you make ends meet.

Eventually we decided I would take each of our seven kids by themselves to an away game. They were my special partner all weekend. They chose what we ate and we got to just do whatever they wanted to do in that city. They experienced travelling with me and seeing what dad’s job really took. That became our tradition, just trying to bring family into what he did, but it wasn’t easy.

Jamie: The idea of being an underdog is present throughout the movie, chiefly in your characters and that of Zack. The ending, of course, is triumphant: You’re a family and Kurt begins a 12-season career in the NFL. But I feel like when you go through those struggles, it’s hard to realize you’ve “made it” because you’re still always working so hard at whatever you’re doing. Was there a moment in your lives where you realized, “We’re not underdogs anymore. We can relax,” or did you still always feel the need to prove yourselves?

KW: I think there was both. Because I tell people all the time that after the game that you see in the movie, I got a call when we were driving that I was the player of the week in the NFL after my first week starting. And I remember kind of looking at Brenda, like, “We made it, we did it.” For one week I was the best player in the NFL and that’s all I wanted to prove. And so you have that moment of, “OK, whatever happens, at least you showed yourself that,” but then there’s always the other side of it. Like, “I don’t ever want to let it go. I still want to prove to people I can do it twice and I can do it for a whole year and I can do it for a whole career.”

Jamie: I wanted to talk to you also about a project I know that is tremendously important to you guys, which is Treasure House, a living community for young adults with cognitive and developmental disabilities, like your son, Zack. It seems that everything you do in your lives is done with real intention, so what prompted you guys to say this was your next step?

BW: We were living it. And when you have a child in the school system that has special needs, you are fighting for every single dime, every single part of every day for your kid. But when they graduate from high school, they’re done with any help at all and you’re on your own. We wanted Zack to have a full life and he wasn’t living that anymore. He was at our house and kind of following our schedule. And I just struggled with, “Now what are we going to do? Who can help us with this?” So I told Kurt, “I feel like we’re supposed to do this.” And he thought I was crazy, but here we are on this side and Treasure House is my baby. It is so rewarding to walk in and see this incredible place that’s full of laughter and love and my son has peers and he has dreams and he wakes up and volunteers places, or he works a job. In talking about our movie, I want to spotlight Treasure House just so people understand the need is so great.

Jamie: Your life now looks very different than what we see in the movie. You’ve got seven children as opposed to the two; you have two grandbabies now. When you look back on the period of your life that is highlighted in the movie, how do you feel about it?

BW: There are so many emotions because the movie shows the good, the bad, the ugly. And I’m proud of that, even when it’s hard to watch, because I’m not about playing a game. I’m not out showing just the shine because faith is the real deal: If you really believe what you say you believe, then when things aren’t going well, that’s when it shows itself. I hope the audience will be able to look at what life looked like for us and be able to relate and think, “If they can keep going, I can keep going.”

American Underdog will be in theaters everywhere on Dec. 25.