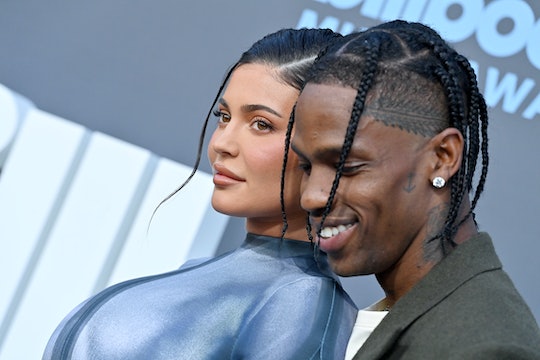 The rapper is a proud dad of two with The Kardashians star.

Kylie Jenner and Travis Scott had a special family moment this past Father’s Day with their son. On Sunday, the Kylie Cosmetics mogul gave her fans a rare glimpse of her baby boy on Instagram.

“Happy father's day daddyyyyy we love you,” Jenner, 24, posted on Instagram, with a picture of the infant laying on Scott’s chest while he ate a bowl of noodles and their 4-year-old daughter, Stormi Webster, laid beside him.

In the photo, Jenner concealed her infant son’s face with a brown heart emoji. Scott and Jenner welcomed their son on Feb. 2, after months of speculation surrounding her second pregnancy. The couple has yet to reveal the baby’s name. Initially, they announced that his name was Wolf Webster but changed their mind. A source told People Jenner will share a new name when she is ready. “Kylie and Travis liked Wolf, but after getting to know their son, they felt like the name didn't fit him,” the source told the magazine. “They wanted to choose the perfect name that they both loved.”

Beyond baby naming, the working mom of two has her hands full growing and pouring into her children. As of last year, Jenner revealed that she was working with her daughter on a secret brand. And according to her own mom, Jenner always puts her kids first. “She gives me so much joy, watching her with Stormi,” Kris Jenner said of her youngest daughter. “I've never seen anything like it. She's so patient. She could be in the middle of the most important thing in her life at that moment and if Stormi walks into the room and says, 'Mommy, I need you,' she will put that on hold and turn all of her attention to her daughter.”

Back in April, the parents of two shared a 9-minute-long video tribute to their son, which documented the moment Jenner revealed her pregnancy to Scott, Stormi going to doctor’s appointments with her mom, maternity shoots, and various special family moments.

“You know, [fatherhood] was the best thing ever for him,” Scott’s mother Wanda Webster told Jenner in the tribute video to their son shared on YouTube. “I see a different person in my son. And you, as a young mother, I was just telling somebody at the party today, what a wonderful mother you are. You always think about Stormi first. And that is so wonderful. I’m so blessed and I’m so happy that you are the mother of my grandchildren.”

Scott may be an accomplished rapper behind hot singles like “Sicko Mode” and “Goosebumps,” but it seems pretty clear that he’s most content just relaxing in bed with the kids and a bowl of noodles