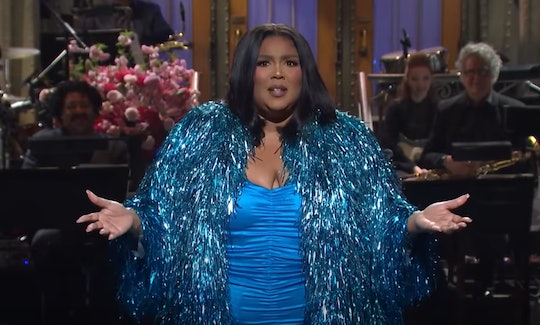 Remember those rumors about Lizzo and Chris Evans? And “their baby” named little America? Lizzo sure does because, well, she started them. The “Truth Hurts” singer was the Saturday Night Live host and performer this weekend and during her opening monologue, she vowed to set the record for the number of times the word b*tch was said on TV, even though she “hates cussing in front of my mama,” and addressed a few rumors floating around TikTok. Like that she was carrying the Marvel actor’s baby...

“I read a lot online that I’m dating every little white boy in Hollywood,” Lizzo said during her monologue. “They think I’m collecting members of One Direction like infinity stones.”

If you need a refresher, the “About Damn Time” Grammy artist jokingly “announced” in July 2021 that she was pregnant with Evans’ child, but was trying to be “personal and private” with the father of her child. “Since we're airing out all the rumors today, I've been sucking in. We're gonna have a little America,” Lizzo said in a video on TikTok captioned, “THE SECRET IS OUT.”

Evans, who played along with the joke, sent Lizzo a private message expressing his excitement for their bundle of joy. “Hi just heard about our little bundle of joy! My mother will be so happy lol,” Evans wrote to Lizzo in a DM that the “Rumors” singer shared with her fan on TikTok.

Now the truth is, Lizzo is not pregnant. The 33-year-old star has a new album that she’s preparing to drop on July 15 titled, Special, according to Variety.

And despite being linked to several girlfriends in the past, such as actresses Jenny Slate and Jessica Biel, Evans is by all public accounts, a single man. He did, however, tell Men’s Journal in 2019 that he would like to be married one day. “I want a wife, I want kids. I like ceremony. I want to carve pumpkins and decorate Christmas trees and s**t like that,” he said at the time.

Whether or not that person ends up being Lizzo is still TBD.

More Like This
Chris Evans Has Choice Words For Critics Of The Same-Sex Kiss In 'Lightyear'
Lauren Conrad Shares Experience With "Lifesaving Reproductive Care" After Ectopic Pregnancy
Ginger Zee Had A Perfect Response After A Troll Asked Her "Who's Raising Your Kids?"
Tom Hiddleston & Zawe Ashton Are Expecting Their First Child Together